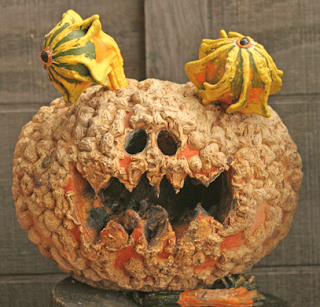 I'm pretty sure pumpkins look forward to Halloween all year. They know they'll get to dress up and look scary and remind us what wonderful 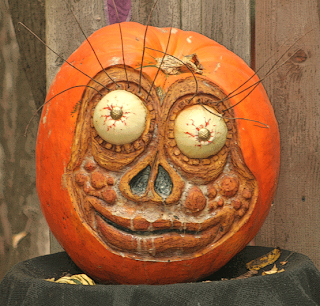 characters they are. This is the pumkins favorite holiday; mine, too. There's no guilt about gift giving, no worries over fireworks or fake Christmas trees vs. real ones. Halloween is simply a time to have fun, to remember our ancestors, eat candy and put on a costume. Pumpkins do all of those things really well. 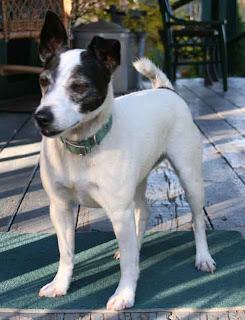 Today is Molly's 10th birthday. She celebrated the ending of her 9th year last night by saving the chickens in the barn, from a 'possum. Mr. Possum goes in at night and eats chicken food, and sometimes eats a chicken from time to time, so Molly saved the day. She'll get a special treat this evening. Maybe a homemade doggie cookie from our Doggie Cookie Kits. 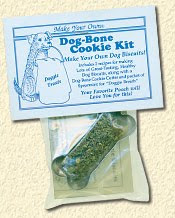 This week we've been celebrating the garden in another way. Our chef friend, Eddie, and his friend, Gregg, have been visi 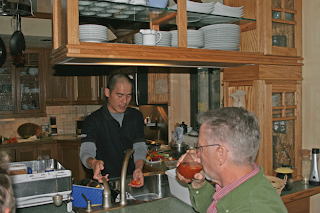 ting from California. Eddie stayed with us several months almost 4 years ago and cooked some amazing meals. I knew little about Chinese cooking back then and it was the during the time I was working on my book, Easy Dips, Using Herbs. Eddie taught me how to make wontons from scratch, including a pepper dip I've grown very fond of. (You'll find his recipe on page 92 of the book). While he was here, and cooking anyway, he decided to check his recipe in the book. It's pretty basic, some fresh and some dried peppers, shallots or onion, chopped fine and cooked in some oil until t

he color of the peppers change. Then you add rice vinegar, brown sugar and sometimes ginger and cook it down by about half. It keeps for weeks, although we usually eat it up much faster.

Eddie browsed the garden like he used to when he was here visiting before and gathered rainbow chard, green malabar spinach, peppers and a few other things for dinner. I gathered a couple of handfuls of figs, a bunch of small achochas (I've written about those several times here before) and nasturtiums for the salad.

So here's the menu that resulted: Eddie made my favorite Chinese soup, which consists of chicken broth with ginger and garlic in which he cooked Chinese meatballs (pork, ginger, dill, garlic, shallot, pepper); he stuffed some jalapeno peppers with the same mixture and sauted it. The soup was poured over noodles and topped with chopped green onion and cilantro.

I chopped up some garlic, ginger and shallots, added some raspberry jam, brown sugar, rice vinegar and marinated pork steaks in that. I grilled the pork steaks, and near the end of cooking those, I split the figs in half, brushed them with vegetable oil and grilled them for about 2 minutes on each side. Grilling carmelizes the sugars in the figs and they are very tasty.

Eddie took the baby achochas and sauted them in some oil with garlic for about 5 minutes, then added a half cup of the soup stock and simmered it until the liquid was absorbed. The achochas remained somewhat crisp and everyone liked this method a lot. (Nichols Garden Seed will be offering achocha seed next spring from my crops). 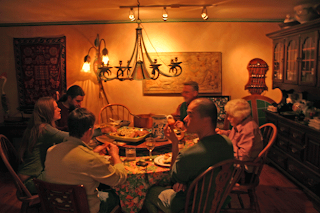 We invited over our friends, Brent & Tammy, who also like to cook and seven of us feasted on and incredible Chinese dinner. We finished the meal with a pear galette, from the Keiffer pears from the orchard behind the house. You might enjoy Eddie's blog (called Chef Chong's Leftovers), which has lots of his food and recipes. 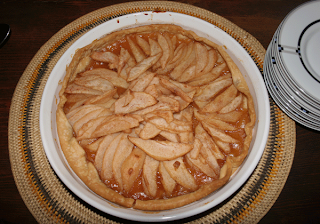 Recipes for this meal will be on my Recipes page in a few days. Enjoy Halloween, with friends and good food, or your favorite Halloween candy. Our just stick your face in the window and grin like a jack-0-lantern!
Posted by Jim Longs Garden at 2:16 PM