Normal Rockwell is to blame 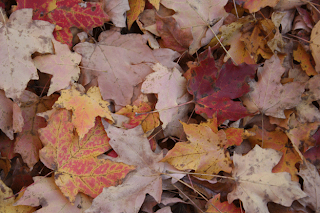 I blame it all on Normal Rockwell. The barbershop where I got my haircuts as a kid had an old calendar of N. Rockwell prints and one of them was a kid and his father raking leaves, a spotted puppy playing in the leaf pile. They were smiling. They were having fun. It was what leaf raking was supposed to be.

I blame Norman on a lot of misconceptions from my childhood. Those Saturday Evening Post covers of the big family gathered around the Thanksgiving table, or the aforementioned leaf raking, or the big day at the grandparents on Christmas. I grew up believing people's families were actually like that. 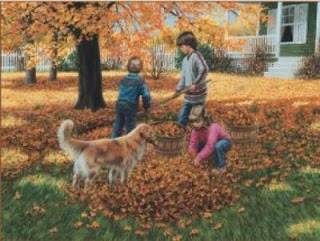 Trouble is, leaf raking is a solitary duty. When the leaves fall, every year, other people are too busy, or have too much to do. Or, "tomorrow." We have several nice, big oak trees in our yard, and a couple of maples, and I'm grateful and glad for every one of them. Until the leaves fall, that is. Oak leaves are like hand sized pieces of brown cardboard and they pile up in the corners and under hard to get at places and stick themselves between the boards on the deck. If left to their own devices, after a rain or two, they pack down like those trendy Cuban pressed sandwiches, and once glued together, have to be pulled out with tongs. Nearly.

So each year I slog along, glaring at the neighbors who drive past, never stopping to help, at the UPS guy who could sur

ely take a few measly hours out of his busy 12 hour day to help, while I stubbornly whale away at the leaves. Yes, I know how much good mulch they would make. They could fill the bottom of the pond at the lower part of the pasture and seal it up so it actually holds water. They could be put in the goat barn for bedding. The fact is, we have mountains of leaves and I have a limited amount of energy. So, with rake and the sometimes-working leaf blower in hand, I round them up into giant piles. I run over them with the lawn mower and mulch some, but it's too big a job for the mower, and in the end, I pile the leaves in the driveway and set them afire. And once burned to black ash, I track some indoors every day just to keep the memories alive. And no matter how carefully I rake and blow and puff, plenty will remain stuck in the flower beds, hiding behind the stacked flowerpots and under places they shouldn't even be able to get to.

I think it's not that I actually mind leaf raking, what I mind is Normal Rockwell having convinced me a long time ago that people came together to do the job, that it was fun, that people smiled while working. I also don't like the fact the le 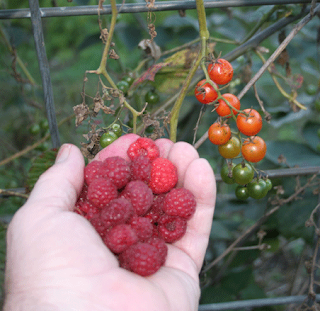 aves aren't green any more and the trees look bare and dead for a whole season.

We're still picking raspberries, roses and lavender, grateful for another week without frost. And the ancient, 'Brush Pile' tomatoes are still producing, as well. These tasty little tomatoes reseed themselves each year in the blackberry patch and grow up and through the berries. When the other tomatoes have quit for the year, these little berry sized tomatoes, just keep producing tiny tomatoes until a freeze finally halts their growth.

So Norman, where ever you are these days, I hope you had to put your paintbrush down and rake a few leaves. Your paintings might have turned out a lot different had you been using a rake instead of a watercolor brush and some of us would have grown up knowing leaf raking was a chore, not a community event. Good leaves to you!
Posted by Jim Longs Garden at 12:27 PM