If you are looking for the authentic curry tree like those used in Indian and Thai cooking, this is the real thing. (If you've bought the "curry plant" (Helichrysum italicum) and were disappointed, you're not alone. That plant, which looks a tiny bit like lavender, isn't really edible. It does have a curry fragrance, but a bitter flavor and other than being a novelty, is useless in the kitchen.

Curry seasoning, which the "curry plant" smells vaguely like, is an invention of the British when they occupied India. They were attempting to imitate the curry flavor found at streetside food vendors. Real curry is made from the leaves of the curry tree (Murraya koenigii). When I was in India I observed how this plant is used. The leaves are pungent and strong, but when 1 or 2 leaves are dropped into hot oil, the flavors are released. Then onions and garlic are added to the oil and browned, then additional ingredients are added, blending together and making the curry.

If you have been looking for the real curry tree, visit my website and click the link, "Looking for Plants?" which will give you some sources. The plant is easy to grow indoors and I keep mine outside in a partially shaded area during the summer. This one on the right is about 20 years old or more and is flowering this summer.
Posted by Jim Longs Garden at 10:59 PM 3 comments: 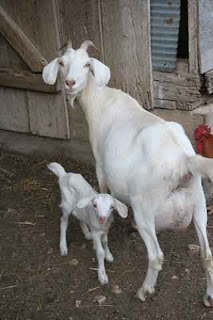 One of our does gave birth yesterday. What a surprise, she didn't look pregnant. The kid was up on wobbly legs in just a couple of hours and nursing. Today she is getting a bit more inquisitive and is nibbling at the other goats and getting to know the world around her.

The alliums and garlic are in full bloom. The alliums in the fairy corner of the garden still have their fairy hats. The fairies tend the plants at night and sometimes they're so tired they forget to take their hats with them and they stay all day on top of the decorative onions. Last week we had a garden club visiting and one of the ladies thought she was doing us a favor by removing all of the hats from the onion blossoms. 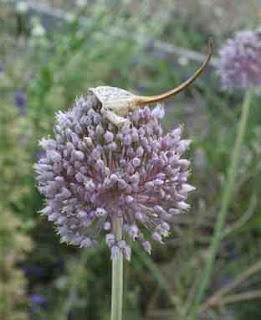 When she heard my story about the fairies she apologized.

Fairy corners, in case you don't know, is an old Ozarks tradition. A corner of the garden is left unplowed for the fairies. It's the spot where the hollyhocks, bachelor's buttons, poppies, four o'clocks and the like, grow. My

grandfather observed this custom but would never talk to me about it. When I moved to the Ozarks I learned it was a common custom and it comes from English folklore.

Our Mexican butterfly weed is blooming and attracting lots of butterflies. It's a stunningly beautiful plant with colors so vivid it looks like it's been painted.

Adam dug the shallots and onions this week and dug what little potato crop there was. My experiment of leaving them in the ground (I didn't feel up to digging them last 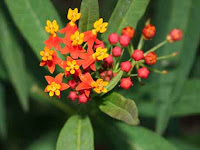 fall before surgery) wasn't very successful. Replanting at the right time, February, is a much better choice. But in place of the potatoes we've planted a row of some new variety of ground cherries, some purple royalty beans and a few hills of Thai cucumbers. And we picked our 3rd and 4th ripe tomatoes today.
Posted by Jim Longs Garden at 11:33 PM No comments:

Stevia, Sweetener of the Future 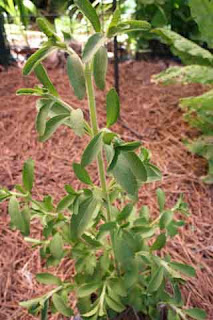 Lots of us gardeners who like to grow herbs know the plant, stevia, the extremely sweet leafed herb that is native to Paraguay. Just one little leaf is as sweet as a teaspoon of sugar, but has no calories. People who want a sweetener without calories, or people with diabetes, use stevia instead of sugar. It works best if added after the cooking process rather than adding it before cooking. I grow one or two stevia plants in my herb garden each year and I offer the dried, powdered herb for sale through my business.

This week, The Coca Cola Company and Cargill jointly announced a new stevia extract. The brand name is Truvia (tru-VEE-a) and it will be showing up in a multitude of products made by those companies.

An article on the FDA’s website describes stevia’s unusual status as a dietary supplement, but not as a food additive. “Stevia is derived from a South American shrub,” the article says. “Though it can impart a sweet taste to foods, it cannot be sold as a sweetener because the FDA considers it an unapproved food additive.”

There have been rumors for years that the sugar industry’s lobbyists have successfully petitioned the FDA against stevia being approved as a sweetener. There is a good deal of information on stevia being treated much like an illegal drug before the Dietary Supplement Health and Education Act (DSHEA). Stevia cannot be labeled a “sweetener” or even referred to as “sweet,” according to the FDA website (more information can be found at www.stevia.net) What is definite at present is Cargill and Coca-Cola are moving ahead with the release of Truvia extract, made from the stevia plant, and labeling it as a dietary supplement instead of a food additive, which keeps it in the legal status for the FDA.

The announcement is significant because this stevia extract has the possibility of replacing other artificial sweeteners now on the market. And all of this from a sweet little plant you can grow in your own garden.

Stevia is pretty easy to find if you intend to grow it yourself. I’ve seen it at every plant festival I’ve attended this year including the annual Herbal Affair at Sand Springs, OK, at the Spring Gardenfest at Baker Creek Seed near Mansfield, MO and several farmer’s markets and swap meets. Ten years ago stevia plants were difficult to find but not any more. You can order it by mail (just click on the “Looking for Plants?” button on my website for sources www.LongCreekHerbs.com) or at any nursery selling herbs. Spring Fever Greenhouses in Rogersville, MO has it, as does Perennials, Etc. at Garfield, AR.

The plant is grown here as an annual even though it supposedly will grow into a small shrub in more tropical areas. In my garden is reaches about 15 inches tall and can be harvested throughout the warm months. It can be overwintered but I simply buy new plants in the spring when I buy my other annual herbs.

To grow stevia, plant it in average garden soil in full sun. The herb will grow anywhere basil or tomatoes grow. You might want to plant several plants if you are going to harvest it to dry for use later. Just like basil or any other herb, the more you harvest it, the more leaves and better flavor it’s going to produce. 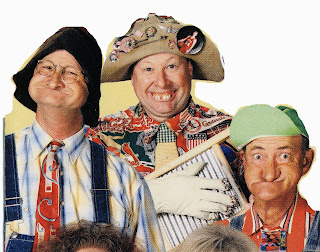 find yellow plastic drinking glasses to make into sticky traps. Wal-Mart usually carries yellow as do the party stores and often the Dollar Store has them. Tanglefoot is available at nurseries, garden centers and most area hardware stores.

No, these fellows aren't my cousins. They're part of the Presley Family musicians in Branson. But don't they look like they could use a glass of iced tea with some stevia in it?
Posted by Jim Longs Garden at 10:43 PM 1 comment:

Labels: Stevia, Sweetener of the Future 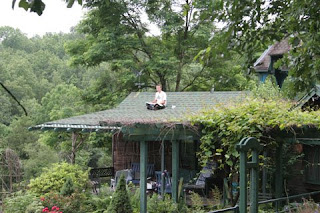 We've had 3 inches of rain in the past 24 hours in already soggy ground. But the transplants are happy and the sun's out and stuff's finally growing. Adam, our resident WWOOFer, has been on the roof today, sketching the garden in preparation for making a map of the beds. The next stage will be to number the beds (again; I'd done this some years back for the Hungarian exchange students), then he'll start on the index of plants. 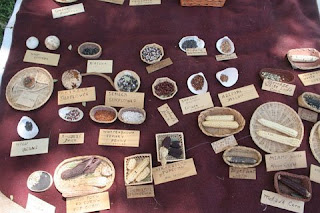 He and I visited the Fort des Chartres annual Rendezvous over the weekend and checked out the 1740s garden as well as displays of native plants used as food.

I met one of the vendors, Cynthia Kay Deardorff of Theakiki River Traders, who was selling Native American heirloom 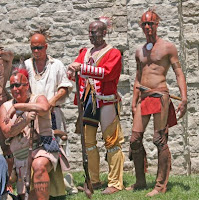 seeds. I bought Seneca bear beans (beans to cook with bear, of course), and some beautiful

Potawatomi lima beans. If you are interested in knowing more about the beans, email Cynthia at cindy@kaspc.com.

We drove back by way of the Great River Road and crossed back into Missouri from Illinois, taking the scenic route across the springs areas of the Ozarks (Big Spring, Mammoth Spring, Alley Spring, all in a region that is rich with native 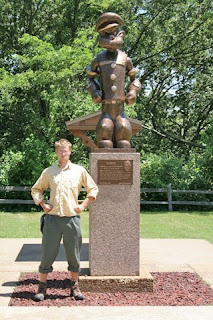 plants, echinacea and others.
We stopped at Chester, IL and visited the memorial to Elzie Segar, creator of Popeye. 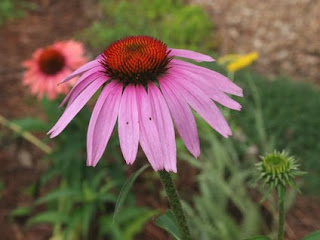 Gotta do those tourist things!
Posted by Jim Longs Garden at 11:33 AM No comments: