Teetering on the edge of cold We've had more than 6 inches of rain in the past 10 days. It's too much, let's share some of it with folks who don't have any. It's cold at night and the last of the summer's plants aren't a bit happy. The figs aren't ripening - they need our normal 70 degree days to finish up before Halloween and get ripe. The muscadines, too, are just looking a bit bewildered. All of the basils are dropping leaves, not happy with upper 30s at night and 40s & 50s in the daytime. Plus the rain. It just keeps on coming and the ground is like a big, wet swamp. No frost yet, but it's been found just a few miles away. 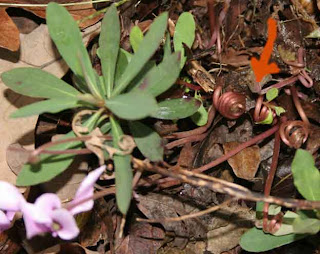 The hardy fall cyclamen are happily blooming away, oblivious to the out of season weather. I noticed today their flower stems, before blooming, are like coiled springs. Click on the photo to make it larger and look at the point of the arrow and you'll see the coiled up flower buds, ready to burst forth out of the leaves. I don't think I ever noticed these coiled buds before, although the larger houseplant variety of cyclamen does unfurl as the buds come to the top of the leaves. (That's not a cyclamen leaf in the photo, but instead, a euphorbia variety). 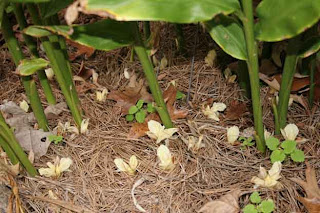 The myoga ginger ( (Zingiber mioga) is also blooming in spite of the weather. Myoga is the most cold hardy ginger and it generally blooms in the heat of early September. The flowers you see here at the base of the plant stalks are the parts that are used, rather than the, "hands" or tubers. The mild ginger flavored flowers are used in anything where you would use fresh ginger. 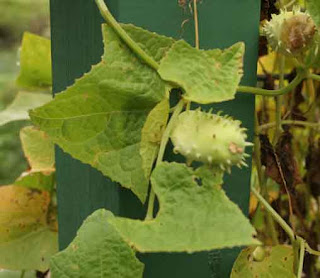 year, both coming from a friend in Bhutan. He collected seed for me last year and I'm surprised how different they are. One, the bright green, deeply lobed leaves, look exactly like the achocha another friend brought me from Brazil some years back.

The second variety, collected by a friend from the Bongo Valley of Bhutan, doesn't look at all like the first variety. Th 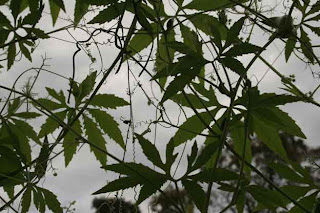 is one has a quite different leaf and the fruit is shorter, fatter, and ripens much more rapidly. Oddly enough, this Bongo Valley variety, pops open into something that looks like an orchid flower. The vines sometimes look like they are in bloom, when it is actually these seed pods after o 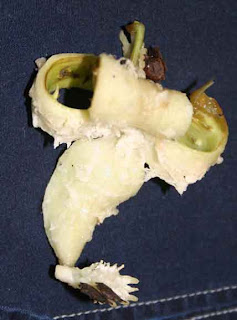 pening into 3 sections, each one having seed on the tips of the "orchid petal."

I'm not giving up to the frost yet. Like the last grasshopper, fiddling away, ignoring the warnings, I will hold off bringing in the last few house plants until the frogs in the pond quit chattering and when the crickets' songs slow down to just a squeak, then maybe, I will admit that frost is eminent and watch the last of the garden die away. Not just yet, though!
Posted by Jim Longs Garden at 11:39 PM