It's hard to put your mind around the battle going on between organic (and non-organic) farmers, and the big giant, Monsanto. It would seem at first glance, that all are agricultural-based, and would have common interests. There's the rub. 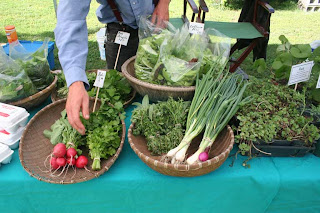 On one side are the folks who grow your food and want to make a reasonable profit for their family farm. On the other, a giant multi-national corporation that is dedicated to creating products for maximum profit, at the expense of whatever gets in their way. You think I'm making this up? Simply do a Google search for, "Monsanto sues farmers" and check this link, too. 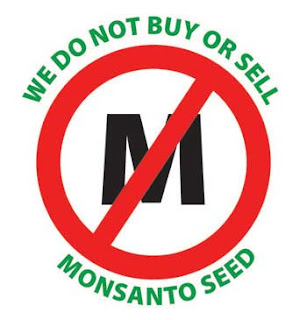 The bottom line is this. Monsanto creates genetically modified seed, which they patent and sell to large-scale production farmers, often called, "factory farms." The seed includes a gene that is specific, such as the Round-up Ready® gene that allows the farmer to plant corn seed, and once it emerges, spray the entire field with the herbicide, Round-Up® and all the weeds are killed, while the crop is not. Sounds groovy, right? But here's the problem. The genetically-modified seed with the added gene, can replicate itself. Not only can it replicate, it does so readily. The pollen can drift into nearby fields, onto organic farms, into your backyard. Monsanto has been aggressive in testing nearby fields of farmers who are not using their patented seed. If they find the genes of the genetically-modified seed in a neighboring field, they sue that farmer for patent infringement, even though the farmer never planted Monsanto's seed, and could not have prevented the Monsanto gene from jumping the fence and contaminating his crops. Through no fault of their own, the farmer gets sued for the contamination that came from a Monsanto-planted field. That's like someone comes along and dumps a pile of garbage in your front yard, then sues you because it's on your front lawn! 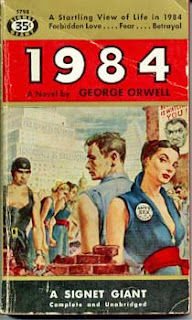 Sound like something out of George Orwell's "1984"? It's worse than that. Big Brother is not only watching you, he is feeding you and if you don't eat what he provides, destroys your means of eating anything else. The courts have upheld Monsanto's claims. Imagine being a little farmer, making a small living of $30,000 or $40,000 a year off your organic farm. Monsanto steps in and sues you for half or three-quarters of a million dollars for infringement - all because their pollen blew across the fence into your field. Do you have that kind of money? Do you have a few hundred lawyers on staff, like Monsanto does? Of course not. Monsanto wins the court battles and you're out of business.

Why does this affect you and why should you care? Because Monsanto's herbicide-ready seed, winds up in your corn flakes. It's in your bread, it's in the coating on your fried chicken and in those soy products you love to eat in place of meat. It's also in the honey you buy and the rice you cook.

Here's a very interesting story about what's happening in this struggle between farmers and the Big Giant bully. It gives an update on how organic farmers are combining resources to try to preserve their rights to grow organic food, without the fear of Monsanto trying to squash their operations. The link I'm guiding you to is Wood Prairie Farm's website, where I buy my seed potatoes each year. They're a nice family with an admirable organic farm in Maine. Their newsletter on the website is worth reading.

What can you do? Buy locally from your farmers market. Avoid buying genetically-modified foods if you can (unfortunately, foods like corn flakes, bread and soy products are not required to tell you if their products contain genetically modified ingredients). Why does it matter? Because there has been virtually no testing to see what happens in our bodies once the genetically-modified organism is ingested. The old adage of, "you are what you eat" comes to mind. Do you really want herbicide-ready genes bouncing around in your body, doing who knows what? I know I don't want that.

Read the comments section of this post and you'll see the fight is going on in New Zealand, too. And it's also being waged in India where Monsanto tried to make a deal with the government to regulate the sale of herbicide-ready rice. Imagine, a country that has grown rice for a thousand years as food, with people saving their own seed from generation to generation, having to buy only approved and over-priced seed from Monsanto or risk sanctions and fines! Fortunately, for now, farmers have been able to stop this from happening with their rice. Here in the U.S., people are more docile and more ready to eat whatever is put before them and organic farmers continued to be sued for "patent infringement" when pollen blows into their fields from somewhere else.
Posted by Jim Longs Garden at 11:03 AM 11 comments:

Summertime, perfect for Salsa and Pie


This feels like a cool refreshing beverage kind of day. Maybe a pitcher of margaritas, or just some fresh mint tea over ice. Speaking of refreshments, how about making a batch of salsa for appetizers tonight? If you already have my Sensational Salsas, from Apple to Zucchini book, then you already have the recipe for my favorite Banana Salsa. But if you don't have the book, click on the link and check out my salsa video, here. And if you go to this link, you'll see that both my Salsas and my Homemade Crackers with Herbs books are on sale right now.

Summer is also pie weather. I've been visiting with Tom and Lori Hess at the Reeds Spring (Missouri) Evening Farmers Market (you can see more photos on the market's FaceBook page). Tom Hess is famous for his incredible pie plates, hand-thrown in his shop. They're deeper than a regular pie plate, made of unglazed clay, and the pie crust actually cooks perfectly on the bottom of the pie.
The cool thing about visiting with Hess Pottery folks every Sat. night at farmers market, is they are also Pie-aholics. They keep a diary of the best pie places across America! They are always on the lookout for really good, homemade pie places. When I name this place or that I've visited, they've likely been there and have rated it in their pie diary! I'm always trying to add some new roadside pie stops to their list. So it was no great surprise when I mentioned Royers Cafe in Round Top, TX, and Royers pies, that Tom and Lori had been there several times.

Round Top, TX is a little bit of a place, even smaller than the town where I grew up. You wouldn't think of it as the kind of eating destination that would be nationally known, would you? Nor would you look at Royers Cafe and immediately think, "Wow, I gotta stop there!" But for those of us who are adventurous-eating-travelers, it's exactly the kind of place we look for.

On a balmy evening this spring when I'd finished with my responsibilities at the herb festival at nearby Festival Hill, I stopped by Royers Cafe just as they were closing. Kind and genial hosts as they are to everyone who steps over their doorstep, they invited me to sit on the front porch and visit. It's a family place and the entire Royer family keep the place running smoothly. Even after a long, tiring day, they found the time to visit with a pie-hungry traveler.
These pies are famous, not just in nearby Austin, or only in Texas, but they have a following across these United States. And what do people come here for? Buttermilk and garlic marinated pan-fried chicken, sandwiches, quail, and pie. Real, homemade, honest-to-goodness pie, the kind that us hard-core pie lovers look for.
So if you're wanting something truly summer-ish, watch my YouTube salsa videos and make either my Banana or Peach-Mango Salsa.  Then, dream about Pie. And if you get anywhere within 300 miles of Round Top, TX, plan to have pie (they also serve other food, sandwiches, quail, chicken, you name it) but save room for real pie at Royers.