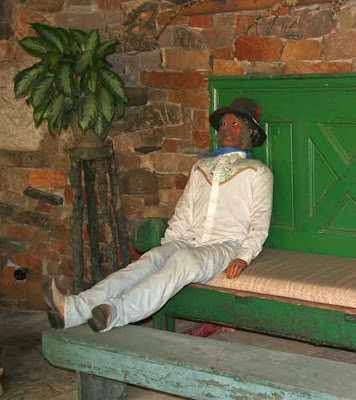 I missed attending the Garden Writers of America Conference last year but didn't want to miss this one, held in Dallas at the downtown, Hyatt Regency. I always come away encouraged, inspired, flattered by folks who follow this blog, rejuvenated and refreshed after a GWA conference. Why? Imagine 500 people, nearly all of whom are interested in the very things you are. These folks are highly creative, eager to share their experience and information, and are there to learn new things, and have fun. It's an impressive cross section of garden publishers, radio and t.v. personalities, movers and shakers in the plant research world, and writers of all kinds. The conference is also where the wholesale plant industry introduces their newest and best plants for next year, and the tool companies show off, and give away, the niftiest new gardening tools that aren't on the market yet.

Plants like this pretty amazing Pink Lemonade Blueberry, above, developed for patio container growing. The name? It relates to the pink to red to purple blueberries, extremely sweet and blue-berry-ish, at any stage! 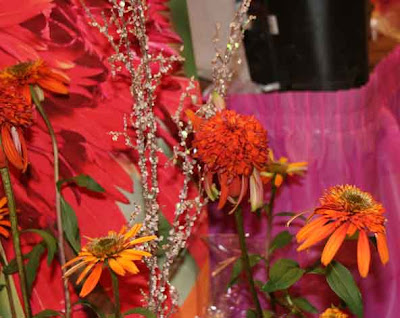 Plants Neuveau introduced several stunning, new echinaceas this year, including 'Hot Papaya' Echinacea, below. Angela Treadwell-Palmer, President of Plants Neuveau, was there to introduce the media to her incredible line of long-blooming Echinaceas. (To see more, visit her website). 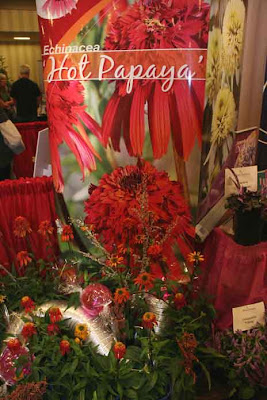 The various companies host small parties for their supporters and friends and I'm always tickled to be included. Angela had just mixed (I forget the name, anyone know this one?) me a drink, half chocolate liqueur, half raspberry something or other. Yum! And in the background, you can see Kelly Norris, the wildly enthusiastic iris grower/blogger/aficionado, along with another person taking my (?) photo, who I don't recognize. 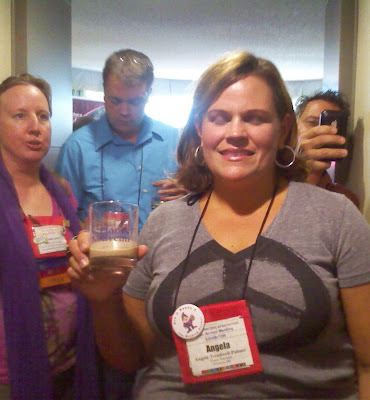 It's worth the price of the conference, just for moments like the one, below. The notoriously grumpy Grumpy Gardener, aka Senior Garden Editor of Southern Living, Steve Bender, having had one too many of those chocolate-raspberry beverages, trying to make time with the dummy in the corner. (You'll notice the link to  Grumpy's blog, on the right of the page in the list of blogs I follow. Check him out, he's always full of grumpiness and off the wall plant advice).

To further prove we always have fun, and not take ourselves too seriously, here's the notorious Jim Martin from South Carolina (below), representing the Novalis plant company. Everyone awaits Jim's annual pilgrimage into the floral depths of gaudy-acious outfits to draw attention to Novalis's new plant introductions. (You can find Jim on his Compost.in.my.Shoes blog). 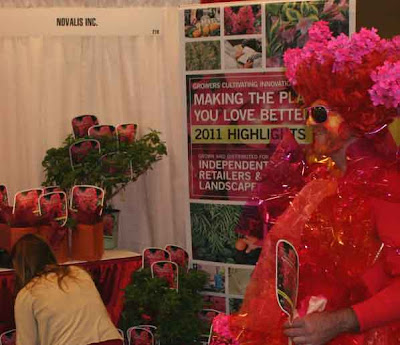 The next post will be a view of some of the gardens we toured in Dallas at the Conference. Meanwhile, we're packing the truck with my books and wares and we're driving east for the first annual, Mother Earth News Fair in Seven Springs, PA. I'm speaking and we'll have a booth and hopefully sell, sell, sell. (If you are anywhere nearby, attend the Fair and stop by and say hi, please).
Until then, Happy gardening and thanks for visiting here!
Posted by Jim Longs Garden at 2:30 PM 3 comments: 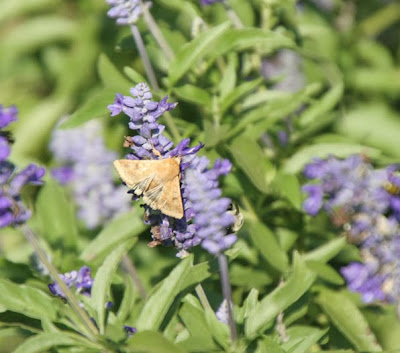 Some catching up from the comments on the previous post: First, no, I wouldn't hire an exterminator and spray my garden with pesticides to get rid of the cucumber beetles (I think this may have been a joke from the person who posted the comment). I'm an organic grower, I would never spray my garden with pesticide. It would kill everything including the beneficial insects I want, and the butterflies, below. And no, I can't use a vacuum cleaner to suck up the cucumber beetles, but thanks for the suggestion. I probably didn't convey the enormous numbers very well in the posting. There are hundreds of thousands of cucumber beetles in the garden, it would take an army of 50 people with vacuum cleaners and they probably wouldn't make a dent. But thank everyone for all of the support, sympathy and suggestions. I love them all!

Thanks to my good friend, Chuck Voigt, at the Univ. of Illinois, who reminded me the spotted cucumber beetle spends part of its life in the soil, as a corn rootworm! (I'm so glad he reads my blog!) That explains the big explosion of the pests just as the corn was maturing. So, there it is, to control the spotted cucumber beetle, "all you have to do" is control the corn rootworm that feeds on corn roots! If it was only that easy. Unfortunately there are no simple solutions to that, either.

We had rain, about 6 inches over a couple of days and things have greened up a bit (I had to mow the lawn for the first time in 6 weeks). The cut flower bed won't return, nor will the tomato patch, nor the red raspberries for a fall crop. But other things have come back to life and the butterflies are everywhere. Here, a Skipper butterfly stares at a cucumber beetle, both wanting the same loofah flower nectar. (The butterfly only eats the nectar, while the cucumber beetle will eat the entire flower). 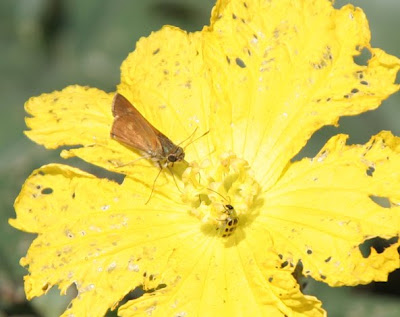 Butterflies are notoriously hard to photograph. I have spent hundreds of hours in past years with my camera, chasing them around the garden. I take hundreds of photos and occasionally get one or two good pictures. Today I was rushed, so these are all just quick snapshots of what's in the garden. Below is a Common Buckeye butterfly, having lunch on the chive blossoms. 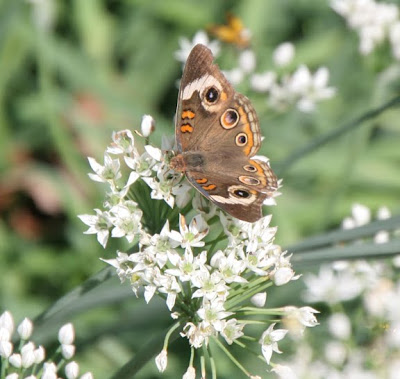 The Clouded Sulphur, below, went from the turk's cap hibiscus to the cypress vine. Sulphurs evidently like red flowers. Maybe they taste better. 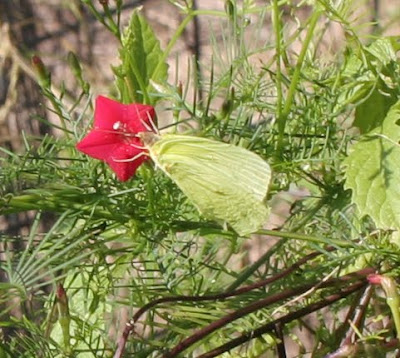 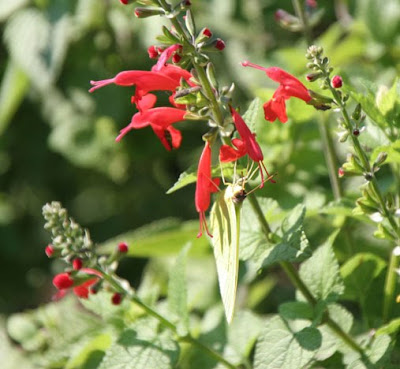 The Checkered butterflies, below, seem to visit all the flowers, including marigolds. Zinnias are a big attractor for all sorts of butterfiles but the drought did in the zinnias about 2 weeks ago. 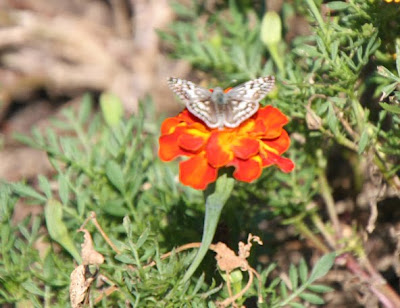 Also in the garden today were a few Monarchs, Black Swallowtails and several others I couldn't identify. Every time I tried to shoot one of these with my camera, it would quickly leave the area. Butterflies are shy things, they see any large movement as a threat. The reflection of light from my camera lens, my shadow, movement, all makes them nervous and they move to another part of the garden. The trick to photographing butterfiles, is to pick a spot near the areas they are feeding, and just wait. The Mexican butterfly weed is a big attractor to all sorts of butterflies, including the Monarchs, but all I managed to catch with the camera were these little butterflies, below, that I haven't identified. 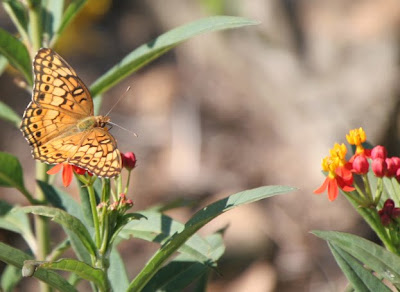 If you would like to identify the butterflies in your garden, here's a great site for doing that. There are thousands of photos with details about the area of the country where you will find each one.

Here's a shot of what the garden looks like today. Still some green but overall, it is looking pretty tired and end-of-summerish. 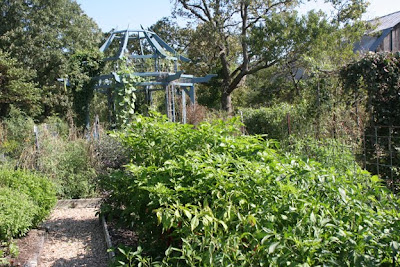