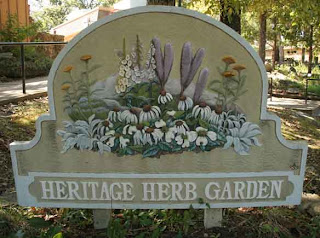 Fall is a great time to visit the Ozark Folk Center's Heritage Herb Garden. It's been a long time since I was last there. Back in 1984, the Committee of 100 in Arkansas, hired me to design a new garden for the State Park. Billy Joe Tatum had already established an authentic homestead garden, and we were to build upon her early work. With little funding and a State Park Director who didn't want an herb garden, I managed to implement the beginnings. I named it the Heritage Herb Garden, because it was created to document and preserve the plants that were on homesteads between 1830 to 1930 in Arkansas. 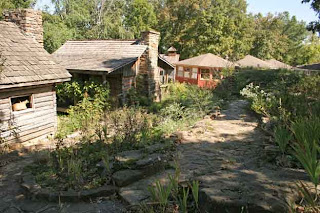 The Director "allowed" the Committee, and me, to have a tiny, north-facing slope, filled with bermuda grass for that first stage of the garden. He promised, but never delivered, stone masons to execute the handicap-accessible walkways and planting beds. Without workers, I layed the stones myself. A back injury during the process ended my participation, and in a round about way, gave me a new direction in life. It was that time, laying flat on my back in bed for most of a summer, unable to sit at my drafting 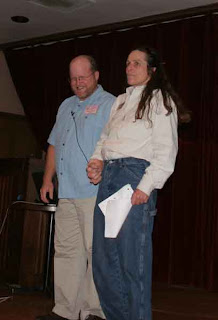 table, or even walk without using a chair for a walker, that I bought my first computer and began writing. Hillary Clinton dedicated the garden in 1985 and from that, she became a customer of ours. In 1986, the Folk Center hired Tina Wilcox as Head Gardener and through her guidance, the garden has evolved into a much larger, vital and interesting teaching garden for children and adults alike. Tina took those very small beginnings all those years ago, and has made the garden home to plant collections and season long activities.

One of Tina's annual projects for the garden is the Fall Harvest Festival, which is the reason I was there. My part in the Festival was to plan the menu and recipes for the kickoff Herbal Extravaganza Dinner, and to give 3 programs during the 3 day Festival. My menu focused on local foods. I'm a supporter of the Slow Foods movement, which encourages the use of local foods, rather than imported. 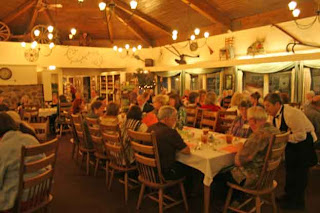 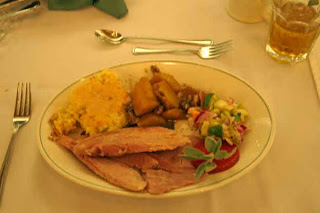 se was Curried Pumpkin-Apple Soup, followed by a Field Greens Salad with Creamy Basil Dressing. And for dessert, a choice of Double Chocolate Chess Pie or Buttermilk Pie.

I hadn't anticipated how difficult it would be for the kitchen to find dry cured Ozarks hams and after a lot of searching, I found some in Missouri. The trout, too, was difficult to obtain but I found 40 at the Bear Creek Trout Farm near Harrison, AR. The dinner came off well, people were well pleased and asked for the recipes. 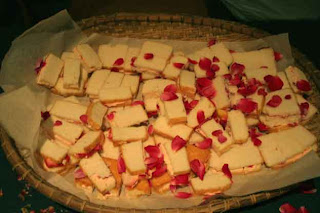 Henry Flowers, who is the head gardener for the late Madalene Hill's gardens at Festival Hill, near Roundtop,T 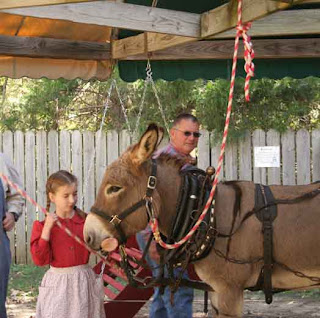 X, gave a program, "Roses are Herbs, Too." My program, "How to Eat a Rose" was just before his. Along with my program, I provided Rose Cookies, Black Tea & Rose Tea and Rose Sandwiches.

The Folk Center showcases crafts and culture of the Arkansas Ozarks. Local musicians perform several nights a week in the auditorium; craftspeople demonstrate traditional crafts. There are mule-pulled merry-go-round rides for children, lots of plants, games, musicians throughout the grounds and a restaurant that does the State Park proud. I always feel like I'm getting a small view of what the Ozarks was like, many years ago.
Posted by Jim Longs Garden at 8:58 PM

Oh what a lovely event this was. I loved the array of foods provided, the setting, the rose foods, and the fact that you rounded up some of the hard to find things.

I adore Henry and Tina Marie. The three of you must have had the place spinning!

The festival sounds wonderful! I would love to have something like that here in the Nashville area sometime! Thanks for sharing. I've been a fan of your dream pillows for years..just found your blog from the Southern Living website.

Have a great day.