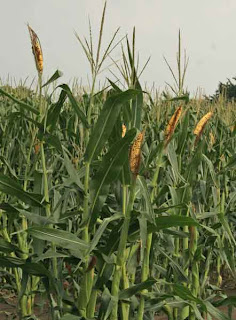 Last August I posted my observations in my blog posting, on a roadside corn field which had ears where the tassels should be. Friends at the Univ. of Illinois commented and explained that some corn varieties, in cool, wet years, may have a few of these errant ears. This field, however, was filled with this oddish corn. I was curious how the corn had fared and last week, went back to look over the field again.

I noted that the field is slightly over one fourth mile long on one side, and my guess is it's an 80 acre field. Because of the long, wet fall weather, the corn had not been harvested. I noticed that the corn ears, both at the 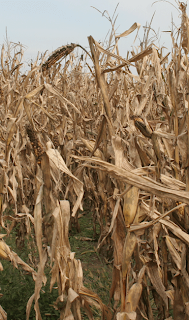 top, and the normally placed ones lower down, had matured somewhat equally. The tassel-ears weren't as fully filled out, but most of the stalks had one or two fully filled ears at about waist level in addition to one or two ears at the tassel level.

The photograph, directly below, of the two fields together showed each field had reacted differently. The field on the right, just feet away from the weird corn field, was normal. No odd looking corn at all.

Notice in the second photo, the normal field view, all of the ears grew at about the top level of the fence posts (the road where I photographed was a bit higher than the ground level). Those ears, going on for about a half mile, were all exactly in the same position on the corn stalks with none at the tassel level, whereas, the field just to the north of it, had ears at the tassel level as well as approximately waist high. So the theory that this aberration was from weather/cool/moisture, doesn't completely hold up, or else, both fields would have reacted similarly. And both fields had corn maturing at the same time. It appeared the mixed up corn went a considerable distance into the field, although I could not be certain as the field was too muddy to walk into. But as far as I could see into the field, weird corn was the norm.

Often the seed company that sells the seed corn to the farmer puts up a sign somewhere along the edge of the field to identify, and advertise the seed variety, but I could find no signs at all and couldn't locate the farmer to ask about the variety. I'm sure the seed corn company would not want to advertise even their name, with this throwback corn as it's not a desirable trait, although highly entertaining while driving along the highway for us strange plant watchers.

And speaking of plant watching, here's a mushroom I'm always happy to find in the fall of the year. It's known as a Bearded Tooth (Hericium erinaceus) mushroom and is found on black oak trees which have had some sort of injury to the bark. Possibly insect damage, being hit by a falling limb, or shot by someone using the tree for target practice, the mushroom seems to appear the year following the injury. (Don't shoot trees, they're living things, too. If you want to target practice, use buckets, paper targets, etc.)

The bearded tooth (I've always known it as "bear's paw") mushroom grows about shoulder height, looks a bit like a white, fuzzy kitten stuck on the tree from a distance. Up close it's more like a smooth-topped mushroom with white fringe beneath. These are very tasty mushrooms, used in soup, or my favorite way, sauted in butter. Simply slice the mushroom in half inch slices first. Another way I like to fix these is to dip the slices in buttermilk, then dip them in fine cracker crumbs and fry until it's crispy on the edges. The flavor is mild, very pleasant and this is one of the really good fall mushrooms in the Ozarks. But, always be absolutely certain of the identification of a mushroom before eating it. Check this site for good information about identification.

If you like wild mushrooms, we offer locally grown and packaged wild woodland mushrooms. The Ozarks Forest Mushroom Medley mixture contains morels, chantrelles and several other tasty spring and summer mushrooms. We offer them through our catalog but not on the 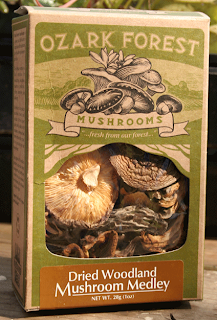 on-line catalog, due to availability and supply. If interested, go to our Contact Us page of the website and give us a call because we currently have a good supply. They're easy to use, with complete directions on the box and these work well in soups, as well as in sauces and toppings for steaks and chicken.

I'm still harvesting things from the herb beds every day, knowing that event 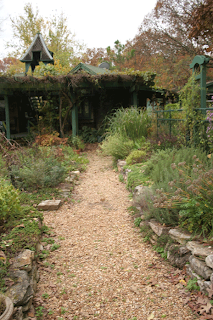 ualy frost will come. As of today, no frost yet and it would be great if we can go to the end of October frost-free. You may notice along the right side of the garden path photo in the raised bed, the basils are still looking relatively happy although the cool nights have slowed leaf production. It's been an outstanding basil production year and I have not dried, frozen or preserved one single leaf and will regret it come the cold of winter. Happy gardening!
Posted by Jim Longs Garden at 12:35 PM