Mint (Mentha spp.) is reported to be making a huge comeback this year, according to the Specialty Food Association’s 39th Winter Fancy Food Show last month in San Francisco. This old-time favorite herb evokes familiar, comfort-flavors of the American palate. Silk Road Soda, a West Coast premium beverage company introduced a line of mint sodas at the show, including cucumber-mint and pomegranate mint and a line of new mint and licorice almond water and hibiscus-mint frozen pops was introduced, as well. 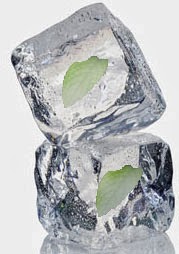 Bar owners have realized that all ice isn’t the same. Commercial ice, as well as ice out of the ice machines, contains air and minerals. Ice with air melts faster and the minerals change the flavor of the drink. Many high-end establishments now have full-fledged “Ice programs” which produce ice for their cocktails that are better tasting, more attractive and, yes, worthier of premium prices.

According to Nation’s Restaurant News, bartenders at Trump International Hotel create house-made cubes formed in pastry molds and blast-frozen and include such items as rose petals with raspberry, elderflower, mint, basil, lemon verbena and others. Their signature drink this year is the Opulence 5, which is a medley of Champagne, artisan vodka, elderflower liqueur served over five different herb-flavored cubes which slowly melt, adding new layers of flavor. It can be added to your tab for a mere $55.
So is there anything new with mints? You bet there is! Jim Westerfield, in Illinois, has been crossing and re-crossing mints for years. His mints are on the "hot" list for chefs and bar owners. One of my favorites is his 'Berries and Cream' (Mentha 'Berries and Cream') which has a wonderful fruity flavor with a smooth, creamy background.
Another of the Westerfield patented mints is 'Fruit Salad' mint. It is a variety of spearmint (Mentha spicata) and has a unique, very pleasant fruity flavor. You'll also find Margarita mint, with a zippy lime background flavor that is perfect for beverages.

All of the Westefield new patented mints can be found only at Richters Herbs. You can find these amazing trendy new mints on-line and Richters has an exclusive contract for these exciting new mints.

And that mint I posted at the top of the page, Mint 'Blue Eye'? That's one I discovered growing beside a woodland spring near Blue Eye, Missouri, 34 years ago. It's an especially good tasting mint and withstands more frost than most. In the fall, at the first frost, I like walking in the garden and picking the frost-covered leaves of this mint for a cool, minty flavor. 'Blue Eye' mint can be gotten from Mountain Valley Growers where my friend, V. J. Billings is growing my mint for sale.
Posted by Jim Longs Garden at 4:10 PM 1 comment:

Another up-and-coming chef herb this year is perilla or shiso. The two more common varieties of perilla (Perilla frutescens) grow wild across the Ozarks region of Southern Missouri, including my garden. Both of these, the red and the green leaf varieties escaped from cultivation decades ago. Both can be found growing wild along roadsides and edges of fields in many places. Visitors to my garden have told me they thought it was wild basil, although it isn't remotely related to that plant. Both the red and green are simply Perilla frutescens, also known as shiso, but both of these plants are quite strong flavored and not as desirable in cooking as the Vietnamese perilla (Perilla frutescens var crispa). Of course that's my opinion, both the red and green varieties are used in Korean, Japanese, Chinese and other Asian cuisines, both as an ingredient and as a coloring agent.
But it is the cumin-scented perilla (not the one above) that I think has the better flavor and culinary uses. I found mine in a plant market near Tampa, Florida this past month. I've had starts before from a friend in Illinois but lost them to frost and hadn't collected any seeds.
The plant varies from green, to green on top and red underneath the leaves, as in the one above. As Tom DeBaggio and Dr. Art Tucker said in The Encyclopedia of Herbs: A Comprehensive Reference, "the application of the cultivar names is poorly defined in the literature. Many different scents of the beefsteak plant also exist." In other words, there are variations of scents in shiso (sometimes called beefsteak plant, mostly for the red-leaf varieties, so choosing the best fragrance and flavor is a mater of choice).
Both the red and green varieties often called beefsteak plant due to the red of the leaves, is used in pickling in Japanese dishes. The green-leaf variety known as "Tia To" is milder and has the pleasant cumin scent and flavor. Other cultivars available include ‘Atropurpurea’ with dark purple leaves; ‘Crispa’ with crinkled bright purple or bronze leaves mottled with green or pink and ‘Laciniata’ with all-green, deeply incised leaves. Varieties 'Green Cumin' and 'Purple Cumin,' both readily available, have cumin-and cinnamon-scented leaves. 'Aojiso' has green ginger-scented leaves, often used with sashimi. 'Red' or 'Akajiso' has rich, deep red to purple leaves. The large-leafed 'Kkaennip' or Korean perilla is used in a variety of ways.

The leaves are used as a wrap in sushi, shredded on salads, mixed in Mesclun salad mixes, sprinkled over cucumbers, cabbage or fish dishes. Try the fresh leaves thinly shredded on a fish taco! 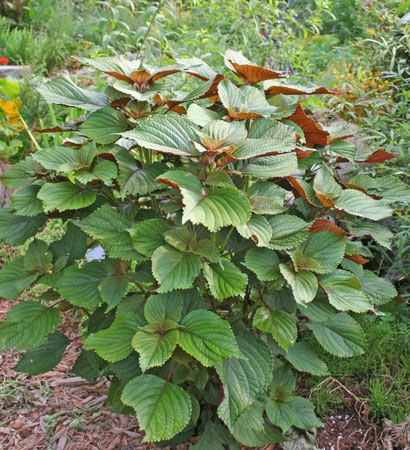 Try this perilla pesto served over pasta, fish or mixed with sour cream as a dip for vegetables.

In a food processor, coarsely chop the almonds, the add the remaining ingredients and pulse-chop until you have a spreadable pesto. This can be stored in the refrigerator, covered, for about 24 hours.

Seed for cumin-scented perilla aren't easily to find. I found only 2 companies that carry it:
Kitazawa Seed Co.
and One-Garden, Inc.

When growing any perilla, be aware it will reseed itself. The cumin-scented one isn't prone to that and I've never had a volunteer plant come up in the garden. But the common red and green curly leaf ones that grow wild, can become a weed if you don't clip out the flowering tops before fall. Even then it's not an unpleasant plant to find in the garden and is easily controlled by mulching over it.
Posted by Jim Longs Garden at 11:21 AM No comments:

Recently I've been working on a couple of magazine assignments about the hot new herbs and plants for 2014 for restaurants. My research started with new restaurant trends on-line, then I've been concentrating on interviews with chefs around the country. Not surprisingly, locally sourced produce is even bigger this year than last, new introductions of non-wheat pasta and noodles, sustainable seafood and children's menus in upscale restaurants are a few of the items.

One hot new herb that surprised me a bit for this year is papalo (Porophyllum macrocephalum), sometimes commonly dubbed "Buzzard's Breath" (although I'm guessing there won't be any chefs across the U.S. who will use that name; let's see, how might that sound on a menu..... farm-raised pork cemitas with seasonal chilies and buzzard's breath sauce...)

Used like cilantro in Bolivia, where my original seed start came from, as well in some states in Mexico, it's easy to see (or smell) why it got dubbed buzzard's breath. Just getting near the plant you'll get a whiff of something akin to aluminum with lemony overtones with some rue and other smells thrown in. That's on the mature plant, which isn't the stage of the plant normally used. The flavor has been described as something like a combination of arugula, mint and cilantro, although that doesn't quite describe it, either. The flavor is unique to the plant.

Papalo is also commonly eaten raw on cemitas - sometimes known as a cemita poblana, which is a Mexican sandwich and street food that originated in the city of Puebla. Papalo is also sometimes found in guacamole and in Mexico it is used fresh in soups and stews. In Bolivia native Quechua people call it Killi and eat it daily just torn up onto foods. (If you use the search button on my blog for papalo, to the right, you can find more that I've written about this interesting herb).


Papalo is showing up in gardens from California to New York City, and in markets with large Hispanic populations. However, a lot of Hispanics from other parts of Mexico or South America may not know the plant at all. I found it in the markets in Acalpulco when I visited there a few years back and admit I didn't understand the plant at all until then. I'd always let mine get to 3 or 4 feet tall and found the flavor of the leaves unpleasant. But in the markets of Acalpulco I discovered it was being grown as seedlings, the whole plant pulled up at about 12 to 15 inches tall, and the flavor of the plant was vastly better than from the mature plant.

Here's a simple recipe to try when you're learning the flavors of this ancient herb. It's a simple green sauce and if you travel in Mexico, you may encounter the sauce used on eggs, sandwiches or other dishes.

In a small skillet, combine the oil, tomatillos, onion, garlic and chile and simmer on medium heat until the tomatillos are soft, about 10 minutes.
Pour the ingredients into a food processor, along with the papalo leaves (I sometimes add juice of 1/2 lime, too) and pulse blend until everything is chunky-smooth.
Pour into a bowl and add the diced avocado. Let stand for about 30 minutes for flavors to blend well. Serve with chips or as a sauce on your favorite morning egg dish.