Jenny, who's our friends, George and Pat's favorite chicken, was agitated and upset at the news of Mr. X this week, as you can tell by the video. Rosalind Creasy responded to my post about Mr. X and set the record straight. Here's the update:
"Thanks Jim, I enjoyed your link, though Robert drove Mr. X from coast to coast, and he spent a lot more time in nursing homes, school classrooms, and in front of garden club audiences than he did on TV. I have had him cremated and am going to scatter his ashes over Robert's grave next summer. My cats are under my roses, however."

I took a drive down to Mountain View, AR yesterday to see friends and pick up some trees for our front yard where I had a tree cut down last week. I bought a 12 ft. white dogwood, an Autumn Glory maple and a Savannah holly. I picked a few bitter oranges (Poncirus trifolium) in a friend's yard. These golf ball sized oranges are bitter and not really edible, but have a nice fragrance. If you don't know the plant and want an unpenetratable hedge, this is the plant. With 3 inch thorns, and a little dab of something on the tips that hurts like the dickens if you get pricked, this is one mean plant. I had one once that reached about 12 ft. tall and even after I'd cut it down, the left over dead thorns still could cause intense pain when picked up. It's almost worth growing this tenacious plant, however, just for the fragrance of the orange blossoms in the spring. And it's plenty hardy to zero or below. 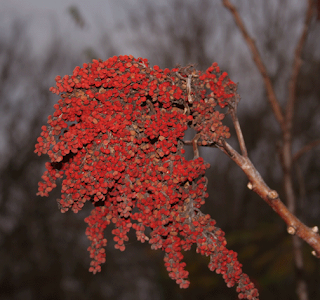 tographed some sumac. I've written about this plant here before. It's used as a seasoning herb in many Middle Eastern countries. Here in the Ozarks we simply boil it, add some sugar and coriander seed and serve it hot as a tea, or over ice.

Rather than retrace my tracks, I drove north from Mountain View to Calico Rock. This is a great little town situated on top of bluffs that overlook the White River, with still operating railroad tracks that follow along the river. Calico Rock is named for the miles of moss and lichen-covered sandstone flats around and beyond the town. Just driving along the roadway you can spot 1 to 2 acre-sized patches of 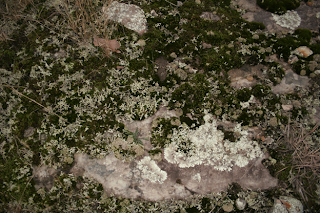 flat rock outcropping and every square inch of the stone is covered with moss and lichens. There must be dozens of kinds growing there and what's fascinating is there's so much life in the moss. It's actually like a miniature world, the closer you look at the moss and lichen colonies, the more activity and life you notice there. An entire world that o 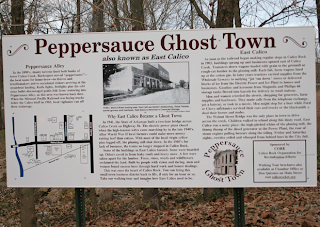 perates separate from and independent of, you, me, anyone.

In the town of Calico Rock (which is known for it's tourist fishing economy in summer) there is a ghost town called, Peppersauce Ghost Town. As many times as I've been to Calico Rock, I had never known there was an old town just across the creek. Lots of 1800s vintage buildings, setting empty. There's a jail that is about the size of my closet, made of stone with tiny holes for the prisoners to peek out of. Mostly it housed drunks, I understand. The name, Peppersauce, was the local's name for white lightning/homebrew, which was made and sold there. It was the seedier part of town and the more respectable townsfolk didn't venture into that neighborhood, not during the daylight, at least. So I looked over Peppersauce Lane, which wa 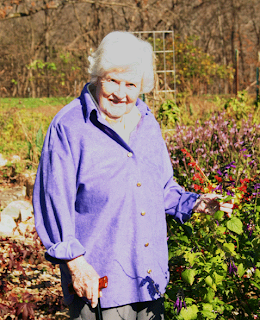 s the main questionable section long ago, and it led across a little bridge and into Peppersauce Alley and what is now the ghost town. Peppersauce - good name for Arkansas home brew!

Today, Josh's mother, Barbara, was out in the garden looking over the salvias and roses, still in bloom with our beautiful weather. I planted the trees I brought home from Mountain View along with a few dozen tulips. Happy gardening!
Posted by Jim Longs Garden at 11:04 PM