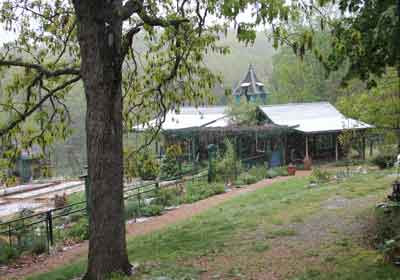 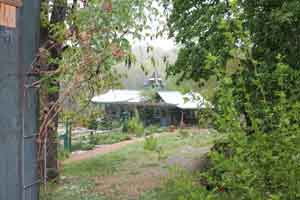 Snow, that's what we woke up to this morning. Our official, last, really last, frost date for Southern Missouri, is May 1. Seldom do we have frost later than mid-April. But snow? Never, in my lifetime. I assumed it would leave in a few minutes, but instead, it has snowed all day long. The soil is too warm, so is the soil, for it to stick. But on the roof of the Herb Shop, and the tops of the planting beds on the left side of the first picture above, the snow has stayed all day. Normally by this time in spring, I have my hot pepper and tomato plants in the ground. All I've planted thus far are my achocha plants, which do well in coolish weather. But not snow.
So I dug up the achocha vines and brought them back indoors for the night. It's not supposed to reach freezing, but even close to that temperature can ruin the achochas. Mine are from Bhutan, although they are native to Central and South America.
Just 2 days ago we were finding morel mushrooms. A neighbor found some yesterday and it's been an especially good year for finding them. Friends saw a farmer on the side of the road last week with multiple pounds of the mushrooms, and was selling out at $35 a pound.
Our intern, Anthony, and I, spent part of the day today making hot sauce and canning some that I'd already made.
This spring has already seen records broken. Latest snowfall, late crop of mushrooms, late planting. And, the earliest I have ever seen potato beetles! It's a crazy season so far and the snow is still falling!
Happy spring. 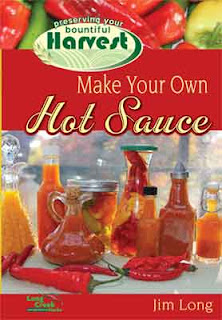 It looks like we had more snow south of you in Arkansas. We had enough to build snowmen, sled in & make snowballs. Tree limbs fell & there were a few power outages. Totally crazy!

snaow in May CRAZY!!....I am so jealous of your morels I dont thinlk Ive ever eaten them