Early winter brings out a rare treat that many people don't get to see. The fragile, icy formations only last a few hours, from before daylight until the sunlight reaches them. They melt within seconds of the sun's warmth touching them. (Click on any photo to enlarge it for better viewing).
It takes particular conditions for frost flowers to form. The soil must still be warm, at least above freezing, and the night time temperatures must rapidly drop below freezing. 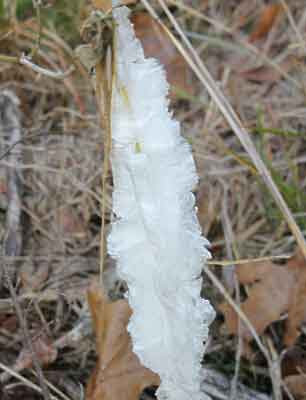 There are several kinds of plants that frost flowers form on, all of them having fibrous or hollow stems. One such plant is carpenter weed, also sometimes known as square weed. You can sometimes  find them forming at the base of yarrow (Achillea sp.), our native dittany (Cunila origanoides), and a few others.
The process is simple - during the night as the temperature drops rapidly and begins to freeze at the top of the soil, it forces still-warm moisture from the ground upward into the plant stems. As the temperature continues to drop, the moisture is forced out the sides of the dead plant stem and the moisture freezes. 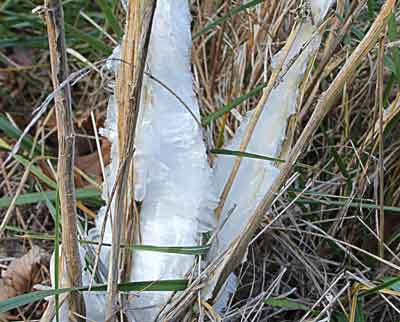 We are still offering our end of season bulk herbs and seasoning blends. They're organic, fresh and at ridiculously low prices. We won't be restocking these, so if you want to give some as gifts, or simply restock your kitchen spice cabinet, check our our specials. First come, first choice. Click here to see our specials.
Posted by Jim Longs Garden at 11:49 AM