A Weekend of Cherries and Peas 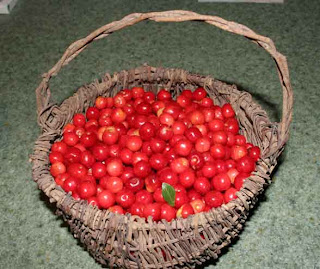 We and the birds have been enjoying the cherries. We've tried to keep ahead of the picking and last evening I picked until nearly dark, getting just about every cherry with red anywhere on it. But by this morning more cherries had ripened and a pair of crows had their 3 young ones in the tree, giving lessons on which cherries were ready to eat and which ones weren't. I have an affinity for crows, a story maybe I'll tell sometime, so I don't mind sharing the fruit with the crows since we have more than enough for a pie already. 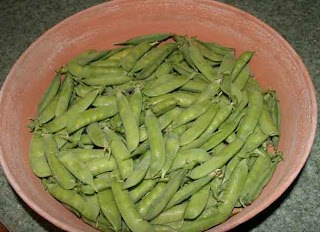 I picked all the peas that were ready the same night. As long as you keep picking peas, they keep producing until the hot weather hits. These were planted on February 14th, the traditional planting time in the Ozarks. We should get several more pickings before the summer heat brings them to a halt. 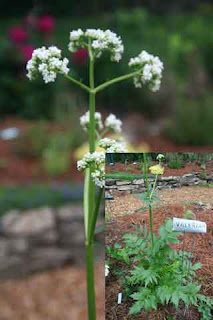 The valerian is in bloom in the garden this week. The flowers have a somewhat haunting fragrance, sweet and yet unusual. I like it best from a distance. The flowers give no hint of what the roots smell like, and it's the roots that are the medicinal part. Dried and ground, even when in capsules, valerian smells somewhat like an old, sweaty goat. Or, many people describe it as what their gym socks smelled like when they found them in the back of the gym locker. Smell aside, valerian is a very good muscle relaxer. My pharmacist friend, Jerry Stamps, recommended valerian to me when I had back pain and muscle spasms. And when I was having nightmares and couldn't sleep through the night, he recommended valerian capsules and a Restful Sleep Dream Pillow. That was decades ago. We still sell his restful sleep dream blend and you can find it on our Dream Pillows page. (More dream pillow information is available on my Dream Pillows blog, too). I don't grow enough valerian to dig and use, but have the plants to show visitors what it looks like. It stays in bloom for only about 10 days, then the flowers grow little "feathers" and take off in the wind, finding new homes in other garden beds.

This past weekend I visited the Shouse family, which you may recall I posted information about after their house burned last winter. Several readers donated to help out this family who had no insurance and lost everything, and several of you have asked for an update. They received enough donations to pay for the foundation of a new structure, to pour the concrete floor and to pay for and install an in-floor hot water heating system. They have borrowed money and have begun framing the house and this is the picture of 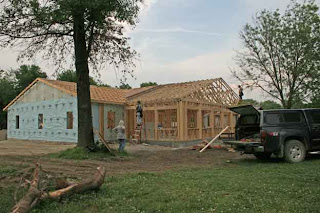 the progress to date. These are folks I grew up with and who have always been a second family to me. To read the entire story here's the link to the earlier blog post. There's also an address there if you feel moved to help these folks who've always helped others so generously and can use the help themselves, now.

Summer is upon us, the garden is growing and the fireflies have begun. Awesome!
Posted by Jim Longs Garden at 11:56 PM