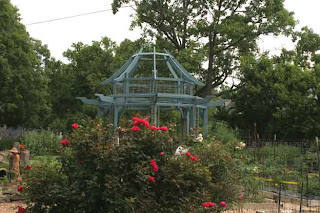 (Just a reminder, you can always click on a photo and make it larger).

At long last, the gazebo has been painted. George gave it 2 coats with the sprayer and it looks great, or so we think and it matches the blue of the 2 garden gates. I have clematis, cardinal climber, moon vine, an antique rose and a few other things planted so vining plants should take over soon.

I've been behind in posting here, pretty well worn out from all the last minute details of cleaning out and organizing the shop. Actually Josh did most of that work, I've been focused on 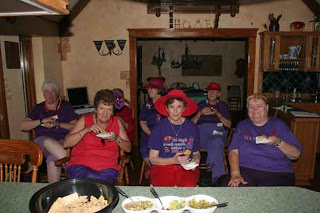 the porches and the garden. Today was our first garden tour, the Branson Show Stoppers Red Hats, who came for a garden tour and a Salsa workshop. They were highly complimentary of the gazebo and had their photos taken under it. The workshop, taken from my book, Sensational Salsas, covered 3 basic salsas: banana, canteloupe and white grape. Everyone had a good time and after eating salsas, I served them lemon balm cake. We have groups and individuals touring nearly every day this week and next.

The first weekend in June is always a struggle to do everything I want to do. The peas are begging to be picked, weeds are coming up like, well, weeds. Josh's birthday was this weekend, and it always coincides with my annual trip to the Fort de Chartres Rendezvous near Prairie du Rocher, IL. The Fort was occupied by the French from 1720 until the Louisiana Purchase, 1820 or '21, I believe. People go and live much like that time period and spend a great deal of time on their costumes, tents, etc. No plastic or fake stuff is allowed. I go to photograph and sometimes to buy seed from seed collectors who preserve some of the Native varieties. 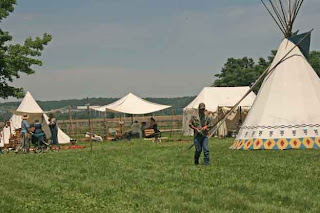 The Fort is on The Great River Road, about 2 hours drive south of St. Louis. The event draws thousands of people and I always look forward to the trip.

We, the Friday Night Dinner group, 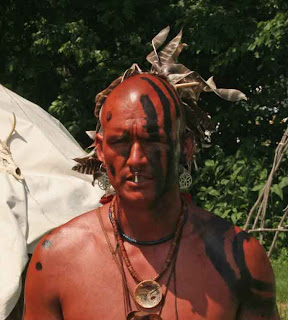 had a birthday party for Josh on Friday night here at the farm. Josh's mother, Barbara, had ordered 3 seven pound lobsters delivered, which Josh cooked and they made lobster salad. (In case you don't know what a 7 pound lobster looks like....and I accidentlly deleted the photos, sorry) one of the lobster claws was as large as my hand, fingers outstretched - mine, the lobster doesn't have fingers!) 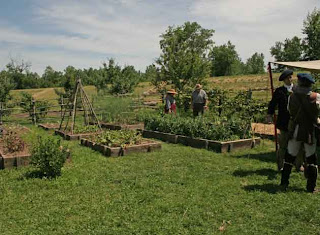 The garden at Fort de Chartres is said to be authentic to the time period. Those amazing French, centuries ahead of the rest of us, used raised beds! No tomatoes there, of course, but lots of beans, peas, garlic, onions and some Native People's crops, too.

The Fort was peopled by French, Indians of several tribes, voyageurs, trappers, later some British, some Scotch or Irish (I can't tell other than they're in kilts). Both adults and children get into the whole thing. One time, a few years back, I asked a reenactor if I could photograph 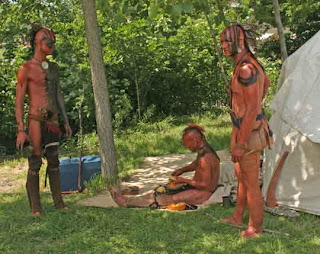 him in his costume and learned he was part French and his family had lived near the Fort in the 1700s. And, his family, all these generations since, still live only about 40 miles from the Fort, which I thought remarkable for so many generations to have passed.

The clary sage is in full bloom this week. It's a biennial, meaning, it came up last year and bloomed this season. I have 2 varieties, a white one that came from Dr. Art Tucker at Delaware State Univ., which is said to have originally come from R 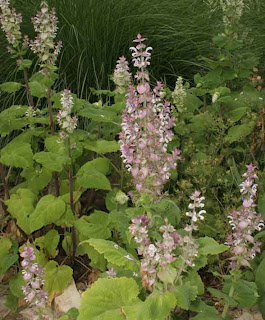 ussia, and a pink to lavender variety that's more common. The white one was said to have been imported by R.J. Reynolds Tobacco Co. and they supposedly grow several thousand acres for use in flavoring for smokeless tobacco products. It's a pretty decent insect repellent and the goldfinches go nuts for the seed after the flowers have wilted.

Rains are coming, the satellite will probably quit working so that's it for tonight.
Posted by Jim Longs Garden at 10:10 PM

compost in my shoe said...

always wondered about the red and purple...although we do see it in nature...cuphea for starters....the Indians look like a lot of fun to visit.....