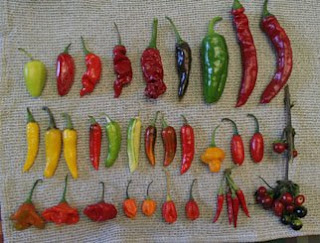 Rains, 2 inches or more each week, have been hard on the peppers. Just 2 nights ago we received more than 3 inches overnight. Several of the peppers have nearly lost all of their leaves. The bell peppers and a few of the hot peppers are producing, but not a bit happy with the moisture.

The hotter varieties prefer soil on the well-drained, dry side, with weekly watering. Ours are mulched with straw, in raised beds, the method that works well each year for us. But not with constant raining. The Jamaican Scotch Bonnet (shown as the little yellow turban-shaped at the left) is a plant I over wintered with good success and it is producing small amounts of it's fruity tasting, pretty hot peppers and is less affected by the humidity and rains than some of the others.

The bhut jalokia I have written about before is doing well but not yet ready to flower, nor is the somewhat rare white habanero. Friends asked me recently, just why it is that people eat hot peppers. They were from "up north," meaning north of Missouri, and said they just do not understand why people want to suffer pain by eating peppers.

Here's what a professional chef on www.gigachef.com says about it:
"In essence, when we eat a pepper containing capsaicin, we are eating that plant's deterrent against being eaten; hence the irritating sensations it produces when we eat or even touch it. Pretty ironic that the reason we eat something is for its natural defenses against being eaten in the first place.

Psychologist Paul Rozin sites this phenomenon as an example of “constrained risk,” something that makes our body respond with warning signals, which we ignore and enjoy, much like riding a roller coaster. It is asserted by many that prolonged stimulation from capsaicin releases B-endorphins from the brain to impede and reduce pain. It is based on this idea that capsaicin has been used as a medication to aid in the alleviation of many chronic disorders, such as rheumatoid arthritis, and viral and diabetic 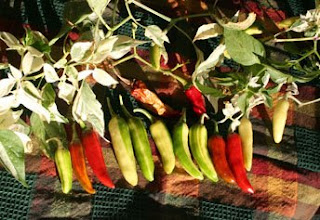 nerve damage. However, much like a chili-eater's tolerance increases with the frequency of his or her use, extended use of this chemical leads to desensitization, and therefore a higher dose is needed to be effective."

In other words, it's a pain-pleasure sensation that become addictive, in the same way eating your favorite flavor of ice cream is addictive. (I like candied jalapeno peppers over my ice cream, combining the best of both addictions). 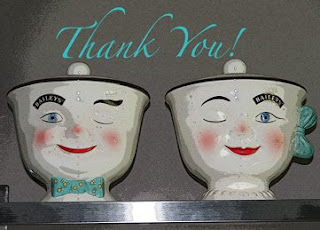 Above are Vietnamese fish peppers I'm growing, hot little peppers that are used when cooking seafood dishes. Even if you don't eat these, they are highly decorative with their variegated foliage and variegated peppers, too.
Posted by Jim Longs Garden at 6:55 PM