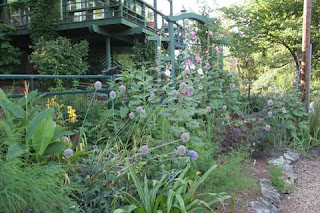 There's a long standing tradition in the Ozarks for leaving a fairy corner in the garden. Tradition has it that fairies come out at night, especially in the moonlight, and tend the garden plants. They give lessons to the lady bugs on how to keep the aphids off the tomatoes; they teach the praying mantises how to protect the squash and beans from marauding pests.

It's the fairies who fluff up the tassels on the corn after a pounding rain and it's the same wee ones who are responsible for chasing the lightning bugs into the air to light the garden in the early evening. 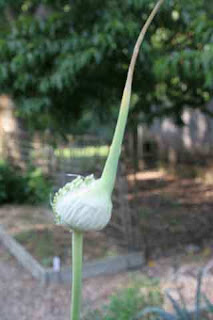 Fairies, I am told, need a place that is safe to hid in the daytime, a place that is never disturbed year in and year out. It's the constant tilling, mulching, weed-eating and Round-Upping of the soil that is the reason people seldom see fairies any more. But in gardens that provide a place, they are still around.

I asked my grandfather, when I was about 5, why there was a corner of his garden where he didn't grow regular garden plants. He kind of blushed and said, "Oh, it's too hard to get the plow into that part." And that's all he would tell me.

Much later, as an adult, I noticed that gardens of older people in the Ozarks, all had this same quality. It is the corner where the hollyhocks grow, where the poppies and bachelor's buttons come up every year. Four o'clocks bloom there as do larkspur, the decorative alliums and in some people's gardens, foxglove.

I began asking people who had these untilled corners, just what they were and was told by several sources, "It's a fairy corner, don't you know?" The tradition has come down to us today from English folklore, and it was a customary thing in English gardens of the 18th and 19th centuries.

Last week I had a group of garden club ladies from Kimberling City, MO visiting. I was giving a tour of the garden which went past the culinary herbs, over to the myoga ginger, horseradish and on to the edible leaf hibiscus. I began to tell the ladies the story of the fairy garden, and pointing to the giant allium flower heads, said, "And here's the proof. Some of the fairies last night left their hats on top of the allium flowers."

But to my amazement, the little hats I had seen earlier, were gone. I stopped in the story and said I was surprised to see the hats had disappeared. Then one of the ladies spoke up and said, "Oh, I guess it's my fault. I saw those little tufts and thought they looked messy and I pulled them all off. Should I have not done that?

I thought it very presumptuous of her to have tidied up my garden flowers, which very well ruined my proof of 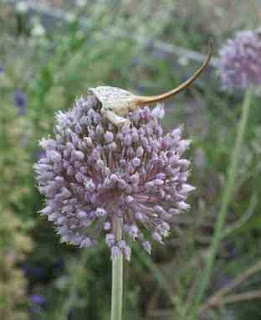 the fairies existence and the reason for having a fairy corner at all. I had meant to photograph the hats earlier and decided I'd wait until the garden club was over with. So after they left, I took a couple of photos of the only fairy hats left in the garden, some old discarded and worn out hats, but this is what will have to do.

And whether you believe in the old English custom of leaving a fairy corner, the more practical purpose is to have a place where the beneficial insects hide out. The mantis' lay their eggs for next year; ladybugs winter over and have a sanctuary in the daytime when they aren't doing their work. And who knows, leave a place for them, and the fairies are likely to come to your garden to help out, too!
Posted by Jim Longs Garden at 11:14 PM

I sculpt fairies out of polymer clay and your pictures and story of fairy hats have inspired me. I now know what real fairy hats look like and am off to make one for my latest fairy creature.

Thank you for sharing them.
Michele Bell

Jim, I really like this column and the idea of the fairy corner!

i heard a strange story about fairies today. i live in the Ozarks and someone i know owns a large piece of land with a river on it. according to him "the fairies come out at night and glow. the fairies don't actually have wings attached to their bodies, but instead are carried around by large moths. they have translucent bodies and have no visible sexual organs. they have skinny bodies, large red eyes, and no mouth." i thought this was really interesting. comment back if you have any more info on this subject, please.

Anonymous, I've not hear that version before. I think it funny that this version has fairies with no wings (power) and no sexual organs (thus, can't reproduce). It sounds like an invented story, told to a child, to remove the mystery and folklore out of fairies. Kind of like churches are doing now, taking the scare out of Halloween because they think the folks stories are evil. The fairy stories we have today came to us with the early English and German immigrants from Europe. Interesting story, thank you for sharing it!

i never thought about it that way before but it makes a lot of sense now that i think about it. i love folklore and really like to believe in such things so that's probably why i didn't see it that way before. thanks for clearing that up for me.