Josh and his mother, Barbara, made it back from Rhode Island yesterday. They'd driven my books and products to Pittsburgh, PA where I was speaking at the Herb Society of American conference. I flew home and they drove on to Rhode Island where the Young family had lived. Barbara hadn't been back to visit in nearly 10 years so it was fun for her to see relatives and friends. That's  Barbara, below, with her Photoshop cucumber, obviously having more luck than we are here. Cucumber beetles wiped out several melons in just 2 days and are hard at work on the cucumbers. It's discouraging, as you can imagine. Nothing stops cucumber beetles (and no, don't suggest what someone last year did; we're organic, I'm not going to call an exterminator and spray the garden). Here's another of Barbara's giant Photoshopped vegetables.
Heat is hovering in the upper 90s every day and we are getting serious about needing some rain. Constant watering, using drip irrigation and over-head, as well, keeps things alive but doesn't satisfy the plants like a soaking rain would. It's hard to believe we were inundated with rains and flooding less than 2 months ago and now we're getting desperate for moisture. Lady bugs are keeping up with aphids and other critters but they're no match for the bigger pests like the cucumber beetles, squash bugs and squash vine borers.
Here's a spotted cucumber beetle, in the photo below, taste-testing a winter squash leaf. Not even birds or chickens will eat these little yellow and black spotted critters.
The potatoes are nearly all dug, most have been sold at the farmers markets on Friday and Saturday night. We may try to plant a fall crop in a week or two. Friends told us they always plant their fall crop of potatoes in mid July so I think we'll give it a try.
We had a very good crop of fingerling potatoes earlier (those aren't fingerlings, above, those are red potatoes). One favorite of the fingerlings is Anna Cheeka's Odette, one of the best for making German potato salad. Fingerling potatoes stay firm when cooked and aren't mealy, which means they don't break up into mashed potatoes when you make potato salad. Here's the recipe I like:

Put the potatoes in a steamer or double boiler and cook over salted water for about 30 minutes or until tender when forked. Let the potatoes cool, reserving 1 1/4 cups of the salted cooking water.

Fry the bacon over medium heat until nearly crisp but still bendable. Remove bacon from pan and cut into 1 inch pieces. Leave bacon fat in the pan. (Bacon drippings, after all, are "America's olive oil!")

Reduce skillet heat to low and add the chopped onion, cooking until soft. Raise heat to medium, sift flour into the onions, stirring for about 5 minutes to make a roux. Let the flour and fat become well bound together and lightly brown in color.

Cut the potatoes into 1-inch cubes and add the sauce, tossing with the bacon pieces. Mix gently. Best served immediately while still hot.

Summer here at Long Creek Herbs means daylilies and we have several colors. Here's one of the orange doubles... 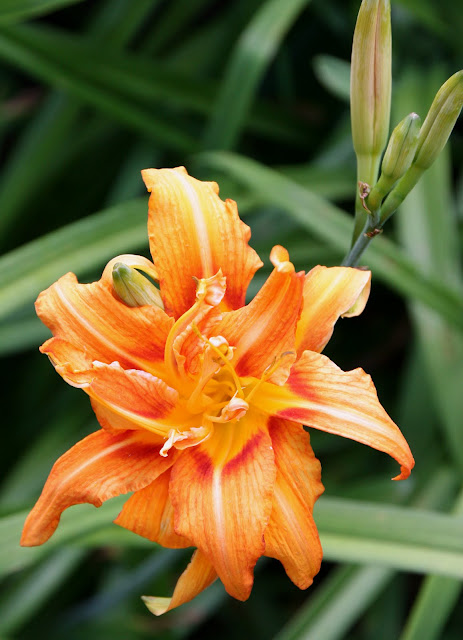 And this white one was a new one last year. 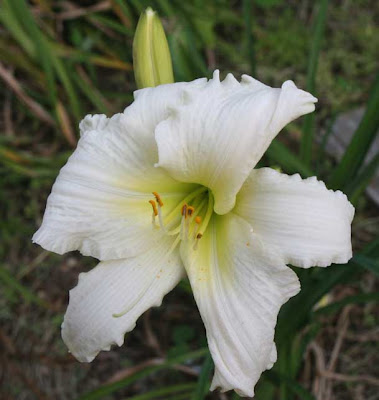 And one more, for contrast. 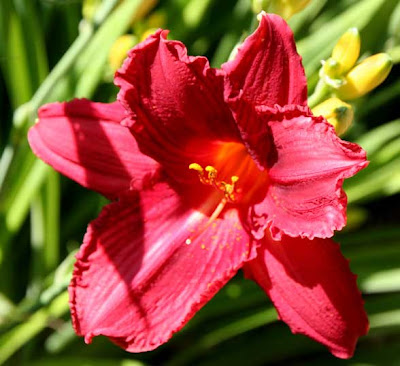 I didn't realize that a late potato crop could be planted. I'll be giving that a try this week :)

I'm growing potatoes for the first time, this year, and that is interesting that you can also plant in July for a fall crop. I like that idea.

I just want on of those large tomato varieties 'Photoshop,' and a big slab of bacon.
With the heat index predicted at 115 today, I don't want to plant nuttin', harvest nuttin', or even eat nuttin' much. I want to sit in the house with the shades drawn and the a.c. on, being a wuss.

Nice work with the giant veggies. Barbara looks wonderful! Quite the gardener.