It was fun having lots of blog followers and readers of my newspaper and magazine columns come to visit for our annual Long Creek Herb Farm open house, June 18. People came with questions about something I'd written, some with questions about a plant they were having difficulty with, others just to see what we're growing this year.

We had worked right up to the hour, trying to get all the construction debris moved away, and we nearly wore out our good friend and carpenter, George, getting ready. In early April we decided this would be the year to give the Herb Shop a complete, and badly needed overhaul. It seemed like plenty of time, but it wasn't. When George and I built the shop 20 some years ago, I couldn't afford insulation in the walls, nor a ceiling, so it was just sheet rock (with wall paper) and open beams overhead. Hard to heat in winter, hard to cool in summer. So it has received a total make-over inside and in spite of the 90+ degree heat, it was c-o-o-l inside!
Some folks came from long distances. I think the ones from the farthest was the couple from just outside Dallas, TX.
Something new this year for visitors to see, is the change in our gardens from smaller plantings, to Adam's project of using the entire garden for larger production. He sells at two area farmers' markets, along with an occasional restaurant (plus feeds us very well and even the chickens have plenty). I've never done production gardening before, so I'm learning new things. Adam, you may recall, was our WWOOFer three seasons ago, and came last year for a month to help me get the garden underway before he went off to Santa Fe to work a production garden there. Instead of a row of carrots, like I grew, or 50 onions, Adam grows entire beds of both. I have no idea how many pounds of salad greens he's sold, and many bushels of carrots and onions It's impressive, and exciting.

I know I've mentioned in the past how inspiring it is for me to see younger people as excited about edible plants as I am. And having new, younger eyes look at what I've built over the past 32 years here, at my raised beds and arbors and trellises, is quite interesting, as well. As we get older, we can get stuck in our habits, we assume we know "the way" things should be. But of course, we experimented and learned when we were Adam's age, we developed skills that have served us well. That doesn't mean our way is the only way. This season, I've turned the garden over to Adam. He decides what to grow, and where, as well as when to plant and how much he will need for sales. I'm the occasional helper since I'm traveling for lectures a lot this season. It's very exciting for me to see what he's doing.

Lots of the early crops, like carrots, peas, lettuce, spinach, onions and beets, have been pulled, washed and sold. Some of the beds are getting fluffed up with the tiller, more compost and mulch, and Adam is planting the late summer crops already. Harvest is just beginning on squash, cucumbers, blackberries, bulb fennel, and tomatoes and basil will be ready in about a week. (He has over 100 tomato plants, probably 80-90 basils, beds and beds of potatoes and has made space in areas where garden has never been before in order to squeeze it all in). 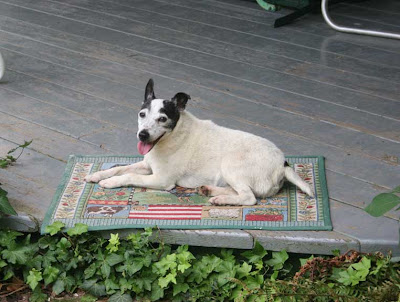 Molly greeted each and every carload and gave attention to every visitor. By the end of the day she was hot and worn out, but happy. So were we!
Posted by Jim Longs Garden at 10:32 PM

Sounds like a lot of fun, and the herb shop looks great! I am really interested in seeing more of Adam's garden work, also never having done production gardening. We have several young neighboring families doing the same thing and sell at Farmer's Market. I am continually amazed by what they can produce.

Hopefully one day Bonnie and I will get out to meet Molly and see your beautiful gardens in person, Jim!

Wow, thank you for the fb invitation to visit your gardens I love what you have growing on. Please stop by and visit me. Not a shameless plug my blog has become my store site http://www.manuretea.com

Fun to have you growing in the Virtual garden of shares Annie <|;-)

Wow, this is all looking so fresh and great. Jim, I don't remember the blue-green colors on things, but I think it has been a long time since our visit with you there.