I feel like I've lived in my truck for all of September. Wondering, even, where September went. I remember planning for Dallas and Garden Writers. The 10 hour drive each way, coming back with lots of great new plants to trial, then barely unpacking just in time to pack for the 2 1/2 day drive to southwestern Pennsylvania. But it's all good, except for the garden being somewhat neglected.

Anyone can garden and I offer this photo, below, of Felder Rusing's garden-in-a-truck. He has all kinds of plants in the bed of the truck (he says this is the real truck garden). There are herbs, perennials, flowers and even a bottle tree. He said it proves anyone can garden, anywhere, if they will simply try. This garden, according to Felder, has traveled 70,000 miles this year. If you don't know Felder, he's the crazy author of a bunch of great books on gardening, totally off the wall and loads of fun; check his website. 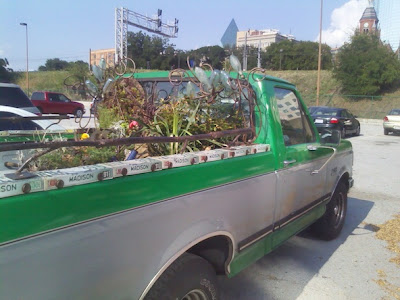 Josh and I drove to Pennsylvania, leaving home on Sep. 21, arriving in time to set up our booth at the Mother Earth News Fair on Friday. (He flew home on Monday, I drove 738 miles on Monday, 310 on Tuesday). The Fair, Mother's first ever annual (with more to come next year) was held at the very interesting and extremely remote, Seven Springs Mountain Ski Resort. Here was our view of some of the ski slopes out our 7th story window. It's a beautiful, huge place and probably interesting with snow, too.

And this one, of the woods in the other direction. It was deeply wooded all around, with hiking and horseback riding trails, 5 restaurants, conference center and more that we never got to see because we were too busy. As you can see, below, fall and leaf-turning had already started in  Pennsylvania.

This first ever, annual Mother Earth News Fair was pretty amazing. They hoped for a total attendance of 8,000 people. Some of the staff said they had nearly 7,000 on Saturday, another 3,000 on Sunday, well exceeding the expectations. I gave 3 programs (Making Bentwood Trellises, Therapeutic Uses of Herbs and Growing and Using Herbs, plus being on a panel with K.C. Compton, Managing Editor of The Herb Companion magazine, with 2 others). My programs, like most everyone else's, was standing room only. I love big crowds, the energy is better, the questions more numerous and I draw my energy and enthusiasm from my audiences. Nancy Heraud (known as the Lemonverbena lady: here's a link to her award-winning blog, check it out), and follower of this blog, came, bringing me a special gift of a jar of her homemade Cinnamon basil jelly. I was so flattered and honored at her thoughtfulness. That's her on the left, below, with her friend, Bonnie Shanko on the right. No idea who the guy in the middle is. 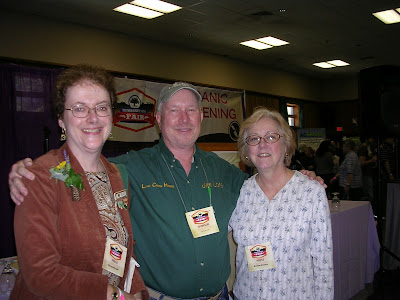 Josh spent almost all of his time at the booth while I was speaking. One of the great things about the Fair was the people who came were people who read. My books sold well, so did my formula Herbal Nail Fungus Soak. There were a wide array of vendors selling green, sustainable technology. Composting toilets, garden tools, solar products; outside, in an area I never saw (I only saw about 40% of the Fair, it was huge) were Amish products, llamas, sheep, bees, all kinds of products, tools, items you need or need to know about if you want to grow your own food, spin your own wool or simply live more lightly on the land. Here's our booth, with Josh glued in place. We were swamped with customers for all of both days, this was just before we opened on the first day.

The Fair is already being scheduled for next year, probably in 3 locations around the country. We were an official Sponsor this year (meaning we got a lot of advertising and especially nice treatment). This proves some points I heard in the Keynote address in Dallas at the Garden Writers Conference, given by Kierstin De West.  Kierstin is the CEO, co-founder and key strategic and research mind at Conscientious Innovation, a Vancouver, B.C. She said, based on some very extensive research, that the "new" shift to green technology, the entire sustainable movement, is not a fad for a fashion that will go away. It is a culture shift that is a profound change in American culture that will have implications on businesses, gardens, publishing and even politics for a long time to come.

With that thought, I will leave you with this amazing garden spider who built her web across the garden gate where I was working on building a stone and concrete step. This particular spider always has a zig zag pattern on the lower portion of the web and is harmless unless you're an insect. These are good spiders, catching lots of the insect pests that bother the garden. She's still there, as of this morning. It was nice to come home to the garden!

You certainly have been busy this summer! Looks like the fair was a big success and so glad to here they are planning 3 for next year.

So glad to finally meet you Jim! Hope to see you again some day soon! Hope you like the jelly!

Sounds like a busy, but fun trip!
Beautiful shot of the orbweaver, I do love seeing them in my garden :)