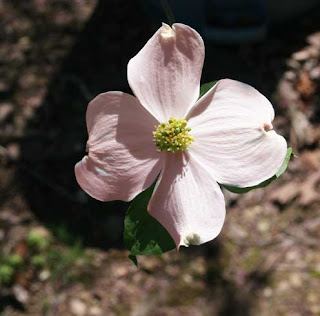 This was the third year for the 100 mile yard sale on Missouri Highway 39, going through Monet, Mt. Vernon and onward. Josh and I traveled the route, hoping it was a better organized and supported event than the first year. But it wasn't. Every town we went through, had a few scattered yard sales, but nearly all of the businesses on the town squares were tightly locked up. You'd think the host town businesses would do a little something, maybe a card table out front of their store with outdated merchandise. Something. But none did. They should be embarrassed.

No great finds were made at the sales and it was, overall, a very disappointing garage sale event. I think they are trying to model it on the great 100 mile yard sale that goes from Tennessee into N. Carolina. I happened upon that once, and it's worth a trip in that direction to catch it again.

But it was a fun day anyway and along the route, along about Miller, MO, I spotted a pink dogwood in full bloo 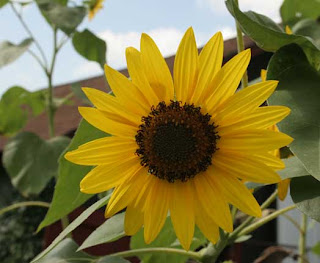 m. The cool, damp summer had caused the leaves to fall, most likely because of leaf fungus, something dogwoods are prone to getting in damp summers. The tree was evidently confused, first by the loss of its leaves, then by the unseasonably cool August weather (last night it was in the mid-40s and felt like fall). The confused tree was full of pink blossoms. It's likely, with the lack of leaves so early and the out of season blooming, the tree will probably not live through the winter.

Late August and early September is the time for yellow. Sunflowers, goldenrod, yellowing leaves on the Spicebush. This last plant, Spicebush (Lindera benzoin) is one of the few shrubby he 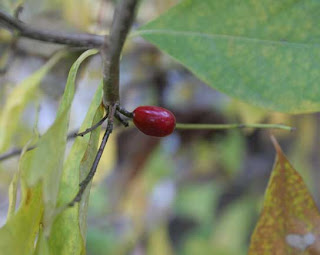 rbs that grows in the shade. It's the size of a lilac bush and produces spicy leaves, twigs and berries for seasoning soups, stews and venison. It's also a good tea herb for colds and flu in the wintertime. Ours here in the garden next to the Herb Shop already has red berries and is beginning to lose it's already yellowed leaves.

The air has been cool and clear, even chilly at times. It feels like fall. Peppers and tomatoes are producing well, although the tomatoes are smaller than in the heat of summer. I've cooked okra and tomatoes, we've eaten sliced tomatoes on everything, I've made cold tomato soup and we still have golf ball and tennis ball sized tomatoes. And we're still fully grateful for all of the produce from the garden. 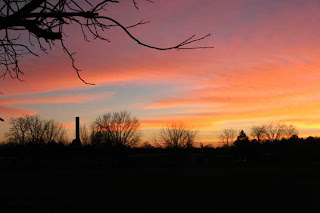 great sunset the other day. We're on the east side of the big hill, so we seldom see a sunset unless we're out and about.

Every day, Josh's mother, Barbara, says this is without a doubt the most perfect summer day, and it's true, the days have been consistently perfect temperatures. I hope you are having such days, too, and enjoying them thoroughly.
Posted by Jim Longs Garden at 10:38 PM

Beautiful pics and would love to use that spicebush leafs for some venison stew or grill......

Well, I enjoyed reading this post - I always enjoy your writing. Then I got to this last photo. It's so beautiful,it almost made me cry. I think whenever I get to this place, I'll know I am home. Don't tell me where it is. I'll know it when I get there.