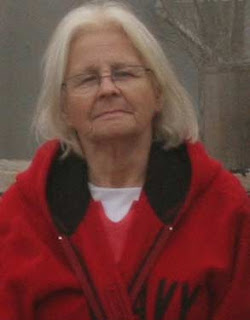 Update on my gardening friend, Ester. She's holding up pretty well, missing lots of things from the house, of course. She lost all her houseplants including a very elegant aloe plant she'd had for 20 years. A few fans of this blog have sent contributions to the account (listed below). Any help, especially contributions of checks, going for building materials, are all greatly appreciated by the family. Thank you for thinking of them during this cold winter season. Jim

Ester Shouse is a lifelong friend and an avid gardener. Her late husband, Roy, took me fishing, taught me how to hunt for ducks, and many other outdoor things, when my father didn't have the time when I was a kid. I grew up with Ester and Roy's 9 children, we swam together, fished and hunted 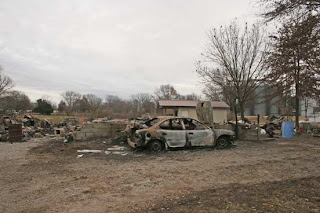 together. The kids, 7 of them still living, are all grown, some with children of their own. But Ester's house has remained the central part of this large family's world. Three of the boys, Richard, the oldest, Roy Jr. and Fred, the youngest, all lived at home and drove back and forth to Lees Summit, MO to work.

Ester, now 80, told me last year she had to slow down somewhat with her gardening. She had planted 500 cabbage plants and 200 tomato plants each spring for the past 50 years but this past year she had cut back to only 200 cabbages and 100 tomato plants. "I just can't do that much any more," she said. And nearly all of the produce, plus corn, beans, peas and other things, was all canned, or frozen for their 5 large deep freezes. That, plus the several deer, fish, squirrels and ducks the boys got, was a major part of their food. 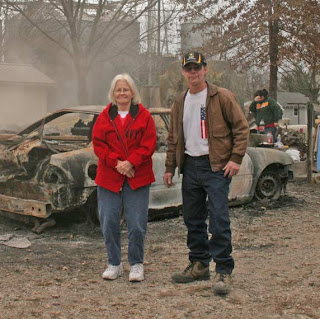 I spent a great deal of time in my growing up years at the Shouse's house. When I turned 16 and bought my first 1950 Chevy car (bought with the $75 I'd made raising pigs when I was 13), I would often stop by Ester's house late at 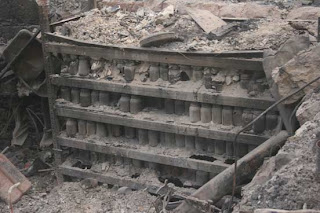 night before heading home from a date. There was always something cooking in a pot on the stove and I knew I was welcome to have some. It was Ester who taught me to eat hot peppers and it is to her I give credit to my love for those. My own mother made great chili, but it was Ester's chili that brought tears to my eyes and sweat to my brow. Whatever their household had, it was happily shared and I was always treated like one of the family.

A few days before Thanksgiving in the middle of the night, Ester's house burned. She was upstairs in her bedroom. A grandson, Byron (just back from Iraq) and his wife, Vickie were in another bedroom and Ester's sons, Richard, and Fred were sleeping in their bedroom. Roy Jr. was downstairs sleeping on the couch and it was he who yelled out the alarm that the house was burning.

All got out alive, thankfully. Roy escaped with his billfold and jeans, but suffered serious smoke inhalation and he was airlifted to a hospital in Kansas City. Byron and Vickie didn't even have time to get their clothes, nor did Fred or Richard. Car keys, false teeth, glasses, clothes, all 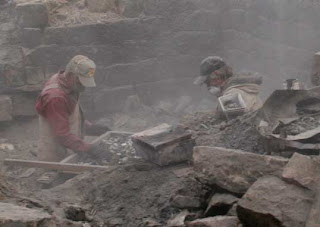 were left behind because the house went up in just mere seconds. Ester's hair was singed, but suffered no physical injuries.

I'm posting some photos here, of Ester and son, Richard, in front of what was left of their old and very modest house. There's a photo of some of the boys sifting through the debris to find anything like car keys or coins. I took a photo of the canning - Ester had canned 157 quarts of tomatoes during the summer and I have no idea how much sauerkraut. The canning sets eerily on some newly built metal shelves that Fred had installed last year in the basement.

If anyone reading this post feels moved to help, the address follows at the bottom of this posting. They don't need clothes or household items, neighbors have been bringing those. Co-w0rkers where Richard, Roy and Fred work took up a collection and bought boots, jeans, etc. What they will need most is cash, to try and rebuild a house for Ester. It won't be the old two story place where everyone congregated, but it also won't have stairs where Ester might fall (she's fallen twice in the past year and broken the same arm, falling down some rickety old stairs from the kitchen). A new house will be built. Pete is a carpenter and cabinet maker; Roy and Fred are welders; all of the boys are hard working and so labor will not be a problem. But buying the materials will be a challenge. There was no insurance on the house.

Somehow out of the ashes another house will arise. This is an amazing family, a family I have been a part of for my lifetime. Not just connected by gardening, but in so many other ways, too. If you want to help, there's an account set up in Ester Shouse's name at the Security Bank of Rich Hill, at Rockville (MO), 320 West Osage Ave., Rockville, MO 64780. (You can barely find Rockville on a map of Missouri; it's in West Central Missouri, near Nevada, Appleton City and Clinton, Missouri. It's a tiny village of about 200 people, a very poor area. Once a thriving town with a railroad and a farming economy, there's not much left any more).

Thank you for any help you can give. Know that your gift is a welcome and badly needed to a family who have lost everything and have to start over. 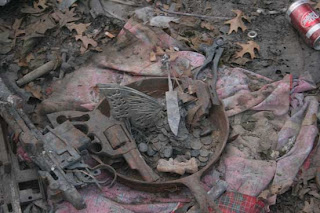 Oh my goodness, this is so familiar to me after the week of hell's fire in our part of the world. Even our home was threatened by a raging wildfire.

I will send a contribution to the bank in Ester's name. I also send prayers for healing, love to an awesome gardener and influence on YOUR chili-loving life.