The Garden is Still Swimming 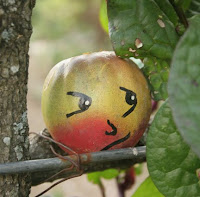 It's a shame to complain about rain when there are parts of the Southeastern U.S. that could use some. But this week, we had over 5 inches, 3 inches last week, nearly every week the same all season. The peppers have quit even trying to bloom, several have dropped their leaves and just look bewildered. The Bhut jalokias, though, are continuing to produce lots of those hotter than hot 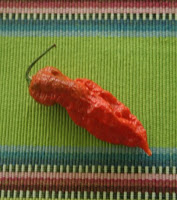 peppers. So far, I've found no one who can even remotely eat a piece of one. I will post a video soon of a friend who tried to eat a tiny piece of one!

The Seneca bear beans are blooming well and are worth growing just for the flowers (I've not tasted the beans yet). I bought the seed from a lady from Minnesota last spring when I ran across her at the Rendezvous at Fort des Chartres at Prairie de Rocher, IL. I asked her why they are called Seneca bear beans and she said, "Because we're Seneca, and we cook them with bear." Makes total sense.

Adam, our summer WOOFer/Intern/Friend, went home for a visit with his father this past 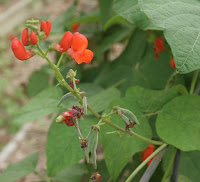 week before he's off on his next adventure. We'll miss his work and his company. He was fun to watch work because he was always tasting everything in the garden. He sort of "grazed" on green beans, papalo, tomatoes, figs, whatever he passed and looked good to eat. He has been a joy to work with in the kitchen, always trying new ways of cooking garden produce, always inquisitive. We ate really well from the garden this year and hopefully Adam will return next season. His many projects have made the garden even more enjoyable, and he worked hard to improve the soil and new planting beds.

I've been drying things in the food dehydrator this week. Adam had been drying apples and peaches and some stevia and herbs and since the dryer is out, I just continued keeping it running. This week I put in a tray of black sesame pods to dry before shaking out the seeds. And a tray of hot peppers along with a tray of okra, one of tomatoes and 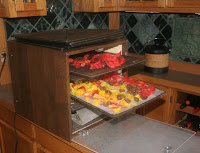 a tray of bhut jalokias for seed.

Molly spent the better parts of 2 days digging under the garden shed, then the Herb Shop porch, after some unnamed animal. Most likely it's an armadillo and most likely she'll eventually either get it, or run it off. But the digging took place in, and after, the rain, so she changed from the black and white dog she 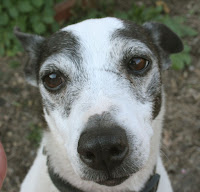 normally is, to a brown and black one. It doesn't bother her one bit to dig in a mud puddle if there's something to chase or catch on the other side of it, but any other time, she hates to get in the water for any reason at all. Unlike this little dog I saw on Sunday, quite happy to float on its own little raft while people were 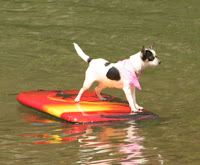 swimming nearby (in the Buffalo River).
Posted by Jim Longs Garden at 10:34 PM