When I say aliens I'm not talking alien people. Nor even aliens from outer space. I'm talking about something much more frightening to a gardener. Cucumber beetles! Hoards, flocks, waves, masses of the yellow spotted devils. So many that just walking through the garden, I have them on me like flies. (Wonder if they'd eat me if I stood still?) hmmmm.

They arrived about a week ago, or actually, hatched out. They were already here, hiding in the soil like those pod people from the movie, Invasion of the Body Snatchers. Just like the pod people, cucumber beetles have shown no emotion as they slashed and burned their way through my garden. 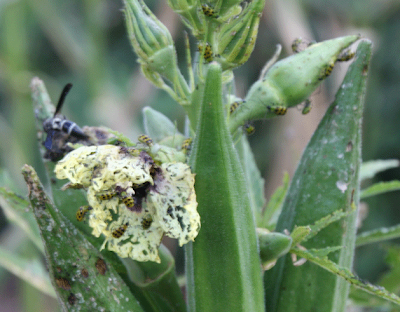 The cucumber beetles have attacked the okra, and in just 4 days have defoliated the plants and are finishing off the flowers and small okra pods. 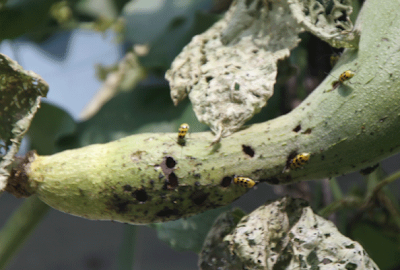 And those beautiful loofahs on the gazebo I posted a week or so back? The beetles attacked the leaves and flowers first, now they're eating the baby loofahs. 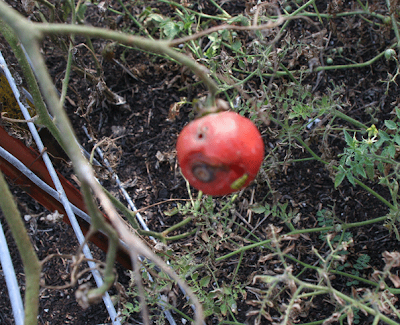 The tomato vines are pretty well wiped out. The beetles bore into the tomatoes, too, ruining them as they ripen. Controlling these pests are a serious problem. If you want to know more, follow this link. There is no easy remedy to these pests, but ATTRA has some reasonable suggestions (including building bat houses, because bats are one of the several predators of cucumber beetles).

Remember those wonderful peaches I showed you about 10 days ago? That bountiful crop, the tree having to have limbs propped up to hold the heavy burden of peaches? They're not quite ripe yet, but here's why I won't get any. First, the beetles bite into the peaches.

Then, when the peach's sweet sap starts to ooze, everything in the insect kingdom moves in for a feast. You'd think I'd put up a sign, "Free Salad Bar, come on in." Notice the butterflies, a beneficial wasp, several of Matthew's bees, and lots of 12-spotted cucumber beetles. 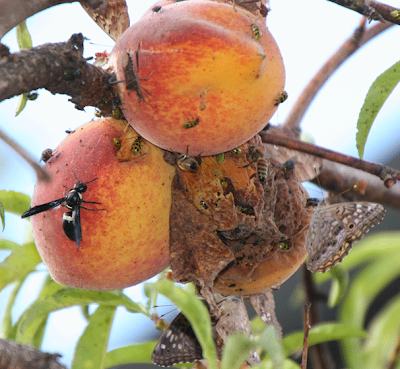 So, we picked as many of the not yet ripe peaches that were mostly undamaged. I'll let them ripen indoors and they won't be as sweet and peachy as tree-ripened ones, but I want to salvage some of the crop at least. And to use some, I made a pie. It contains 4 not nearly ripe peaches and 3 Granny Smith apples. 1 cup of sugar, 1/4 cup tapioca and a bit of butter. I topped it with a thick, crumb crust, recipe below. 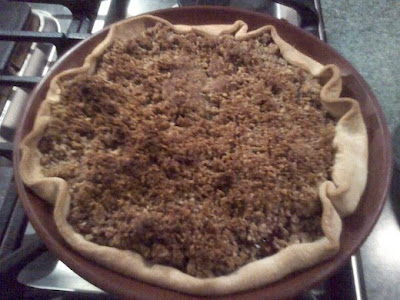 Funny, it looks scorched. It wasn't, it's just the photo. It was actually a tasty golden brown. No matter, it was really good! Crumb topping: 1/3 cup butter, 1/3 cup flour, 1/3 cup brown sugar, in a food processor and pulse process until the pecans are coarsely chopped. Pile it on top of the pie - it will be thick, that's good. Bake at 400 degrees F. about 45 minutes.

So, is there anything the cucumber beetles haven't eaten this week? They are tasting the Bellingrath  Gardens pepper, see that one hiding under the leaf at the tip of the arrow? 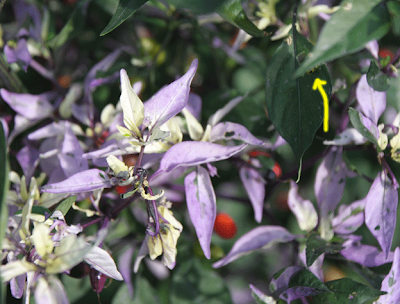 So far, they've left the lemongrass and the chives alone. Wish me luck, there may not be much of the garden left by next week! 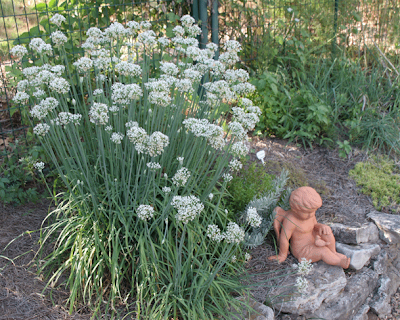 Those beetles look completely hideous! Are your hens interested in them at all? Maybe guineas?

Have you ever had such an infestation before?

My friends' orchard lost its entire apple crop this year from black rot, a product of intense heat and humidity. So very sad to see so much great food getting destroyed by pests and plagues.

Jim, this has been a rough year all around. My peach tree, with hundreds of baby peaches on it, died. The only thing I can think is that the mole injured the roots because all of a sudden there was a lot of sap-looking stuff coming up out of the ground around the trunk.

Take those peaches with bites out of them before they start to rot, cut out the bad places and make jam.

Maybe next year will be better, if things here in OK can survive the drought.

I enjoy your blog. --ilene

compost in my shoe said...

Who needs a horror flick when we can look through your blog post images. Scary stuff!!!! Guess I don't need to ask if you got that one under control?

I feel so sorry for you. Your garden has been destroyed a whole lot. Why don't you contact a good pesticide company ? They might help you in re-establishing your garden.

Walking in the garden

Parag, surely you were making a joke! The idea of spraying an organic garden with pesticide, well, I might as well give up gardening! Would you really do that to the food you eat?

There is a direct correlation with when corn matures, and the hatching of these beetles. From my friend, Chuck, at the Univ. of IL, the corn rootworm larvae, hatches into these pesky beetles! Control the rootworm, control the beetles. Wow.

GET OUT YOUR SHOP VACUUM, fill with soapy water, AND GET BUSY.