I've long wondered how 'Arp' rosemary got its name, and I admit I always thought it an odd choice for a plant name. While visiting Festival Hill a couple of years ago, I was pleased to share breakfast with Gwen Barclay and Henry Flowers. Gwen, as many of you may remember, is the daughter of the late Madalene Hill (whose incredible rosemary collection resides at Festival Hill). Henry Flowers it the horticulturalist and over-all plant genius at Festival Hill and began his work under Madalene's supervision. (If you want to know more, you can read the tribute I wrote about Madalene on my earlier blog, here.


Gwen made a reference to Arp rosemary, how there were a lot of the plants sold during the plant sale that weekend and that the Herb Society of America was intending to plant a commemorative plaque in Arp.

So I got the whole story, directly from Gwen and Henry.

Gwen and her mother have cousins in Arp, Texas, southeast of Tyler. One Christmas they were visiting their cousins and Madalene noticed a very robust rosemary, in full bloom, in front of an abandoned house nearby. It was unusual for a rosemary to be covered with blue-lavender flowers at Christmas time. Madalene inquired of her cousins and the neighbors if anyone knew who owned the old, neglected (and empty) house. No one knew anything about the owner.

Madalene borrowed a knife and made several cuttings from the very prolific rosemary and took them home with her to root. Over the next few years she shared the cuttings with several people, including the late Tom DeBaggio. He began propagating the now named, 'Arp' rosemary for his retail nursery. (You can read more about Tom and his amazing story of dealing with Alzheimer's disease on his nursery website here; you will also find lots of stories about him on National Public Radio, the Washington Post, etc. if you Google his name).

One day Tom noticed that one rosemary stood out as different from among the dozens of trays of Arp rosemary cuttings and he separated it out and grew it on, propagating more. That rosemary was more gray and fine-leafed than the Arp rosemary which appeared to be its parent. Over time Tom discovered the grayer rosemary to be equally or even more hardy than the original Arp, and he dubbed it, 'Hill's Hardy' rosemary, in honor of Madalene Hill who had first brought it to him.


Since I had Arp rosemary with me, and now knew the real story of the origins of both these exceptional rosemaries, and since I was already heading toward Tyler, TX from Round Top/Festival Hill, I decided I should definitely drive to Arp, TX and see where this amazing rosemary came from.

(Madalene had found, in later years, the name of owner of the property, and learned the rosemary had come to Arp from "somewhere up in Oklahoma," but no one knew anything else about its origins). The Herb Society of America is slated to erect the plaque in Arp, sometime this coming summer.

So there is the story of the origins of a this particularly good, and hardy rosemary and it's cousin, 'Hill Hardy.' The rosemary itself is likely more famous than the little town it came from, but you can't miss the sign if you drive through.

This year, however, with the deep and prolonged cold (3 degrees for us in December and January) even my Arp rosemary has been killed. It's been tough, lasting for several years but this was a record-breaking cold with more snow than I can remember in my lifetime. I'll have to start over with some new rosemarys.

I've posted this before but thought a reminder would be in order since it's seed-ordering season. If you are going to order garden seed, consider ordering some of your seed through my website. On my home page, scroll down to the bottom and on the left you'll see this button:

We raised $465 from Renee Shepherd, from people who ordered her seed through our website, all of that money going directly to the kids' garden project. Thank you to all who ordered!


Kids gardening is important! When kids learn how to grow plants, learn where their food comes from and how to prepare healthy meals, they learn skills that will stay with them for their entire life. I've written about the amazing kids' garden project at the magnet school in Jonesboro, Arkansas, several times before. (Click here to see an earlier post and more photos). And here for the story about cooking with the kids in their amazing kitchen. But I thought you might like a reminder that this project is always struggling to find enough money for seed, soil and other supplies the kids need.

We've had the button on our website, "Buy Seed, Help Kids," for the past 3 years to encourage readers to order and help the kids. It's a project whereby you can order garden seed from Reneesgarden.com, for your own garden, and Renee Shepherd generously donates 25% of the revenue from your order, back to the school! It's a wonderful project. If you go to our website, LongCreekHerbs.com, here's the button you will see on the left side:

When you click on that, you are directed to a page with a code to enter when you place your order at Renee's Garden Seed You can order seed for your spring garden and when you order, it will count toward a donation for the kids' garden project, and you will receive outstanding seed.

Renee Shepherd donates to a wide variety of children's garden projects, both in the United States and in other countries. That's why we are so pleased to partner with her in helping this garden in Jonesboro, Arkansas. If you have not visited her website, please do so, her seed selections are outstanding and I grow many in my gardens each season. (AND... if you like wasabi flavor, consider her very tasty and easy to grow Wasabi Arugula! I don't like arugula much, but I love the wasabi variety). 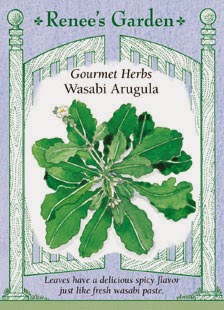 To visit Renee's Garden website, go to our website at Long Creek Herbs, and click on the Help Children- Seeds button.  You'll find the link to Renee's Seeds website, look around and see if you aren't tempted by her spring seed offerings. Then when you order, use our code (it's in the instructions you'll see), so that she can make a donation to this wonderful project. Then, you will know that more kids, like this boy, below, can experience for the first time in their life, the taste and smell of a chive blossom and learn how to fix a meal using fresh herbs and vegetables right out of the garden.
I hope you'll consider ordering seed from Renee Shepherd, she has outstanding varieties you won't find anywhere else. And when you order, won't you do it through my website so the kids get credit? Thank you!